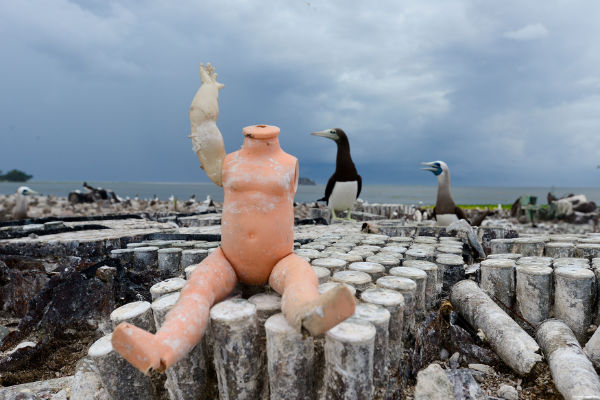 THE TYRANT OF CLIPPERTON ISLAND

Months passed, with Álvarez borrowing whichever female islander he wanted whenever he wanted: when he’d had enough of 20-year-old Altagracia Quiroz, he moved on to 13-year-old Rosalia Nava, and then 20-year-old Tirza Randon. The strong-willed Randon was far and away the most outspoken about her hatred of Álvarez, but was unable to think of a way to escape. “King” Álvarez was aware of the chance of being discovered by passing ships, especially since he knew that Alicia Rovira Arnaud would immediately tell all to any outsider who appeared. Consequently, Álvarez singled out Arnaud for threats, telling her that he would kill her the moment anyone from the outside world came into view.
Álvarez was almost certainly mentally ill. He had been belittled for much of his life on account of his African heritage, which was as stigmatised in Mexico as it was in the United States at the time. Years of isolation on Clipperton could only have amplified his anguish; lighthouse-keeping was notorious for causing madness.
Somehow, life at the colony went on for nearly two years under Álvarez’s reign of terror. The women and children divided up the coconuts and the leftover scraps of materials following the storm. Álvarez went on cycling through his trio of women. In the middle of July 1917, he got tired of Tirza Randon again, and decided that his next target was Alicia Rovira Arnaud, whom he had not pursued earlier. He picked up his rifle, took Randon back to the main settlement, and informed Arnaud that she was to present herself at his hut by the lighthouse the following morning. Sensing an opportunity, Randon informed Arnaud, “Now is the time.”
On 18 July 1917, Arnaud and her seven-year-old son, Ramón Arnaud Jr., set out for the lighthouse-keeper’s hut, accompanied by Randon. Álvarez, sitting outside roasting a bird, was in uncharacteristically good spirits; however, he was not happy to see Tirza Randon back so soon. “What are you doing?” he asked her, and attempted to shoo her off. Instead, she ran into Álvarez’s hut, returned with a hammer, and upon a signal from Arnaud, took the hammer in both hands, swung, and struck Álvarez in the skull. And then a second time. Arnaud sent her son inside the hut, and meanwhile Álvarez shook off Randon, grabbed an axe, and went after Arnaud. Arnaud yelled to her son to get Álvarez’s rifle. He did, but in the meantime Randon had landed another good swing on Álvarez, and he fell to the ground. She had most likely killed him by this point, but she allowed her rage to lead her to a knife, return, and stab the body repeatedly. In hysterics, Randon then began slashing at the dead man’s face. The dictator of Clipperton Island had met his end.
The USS Yorktown
Even as the three still stood alongside the expired tyrant, little Ramón spotted something on the horizon that the community had not seen in nearly two years: a ship. The USS Yorktown was an American gunboat patrolling the west coast of North and South America, looking for German U-boats in accordance with a rumour that the Germans had established secret radio and submarine bases in the Pacific. Clipperton Island fell right along the Yorktown’s route, and certainly qualified as a potential hiding-place for the enemy. The Yorktown circled Clipperton and made an attempt to send a smaller boat ashore, but the Americans were unable to reach the island and the boat returned to the ship. The islanders were devastated to see this retreat; just when they had caught sight of an opportunity to escape, it had disappeared. The women even briefly discussed whether they should just give up and either shoot each other or drown themselves in the lagoon. Fortunately, though, the Americans made a second attempt at sending their boat to Clipperton’s shores, and this time they were successful.

Arnaud met the Americans and frantically indicated the islanders’ desire to leave as soon as possible. Several members of the crew accompanied the women to the settlement in order to collect a few possessions, and others investigated the lighthouse. The Americans noted that the children were all small for their ages due to malnutrition; in particular, two-year-old Angel Arnaud was suffering from rickets and could not walk. Eleven-year-old Francisco Irra carried Angel on his back all the way to the American boat, and the sailors took the Clipperton Island survivors–three women and eight children–to the Yorktown. Álvarez’s body was left for the crabs.
Yorktown captain Commander Harlan Page Perrill later wrote in a letter to his wife:
I noted the women and some children gathering along the beach and you can imagine my surprise when the watchers on the bridge reported that they were getting into the boat. Speculation was rife. When Kerr got alongside and made his [oral] report, he revealed a tale of woe absolutely harrowing in its details.

Navigator Lieutenant Kerr’s official written report of the Clipperton Island rescue divulged no details whatsoever about the anti-social lighthouse-keeper; Kerr and Perrill were both eager to protect Randon and the other survivors from the potential legal and social repercussions of the final altercation between the women and Álvarez. For seventeen years, neither man would say a word about what had really happened on Clipperton Island between 1914 and 1917.
The Yorktown briefly suspended its German-hunting and set a course for Salina Cruz, Mexico, where a number of the women and children had family members. They sent ahead a wireless message to the British consulate in the city asking for help in locating relatives. The islanders all experienced some seasickness but liked the environment of the ship, and the sailors grew fond of the children. On 22 July 1917, the Yorktown reached the mainland.
Clipperton survivors aboard the Yorktown
Right after the ship anchored, a boat appeared carrying Felix Rovira, the father of Alicia Rovira Arnaud. He had been regularly questioning Mexican authorities as to the fate of his daughter, only to have been told repeatedly – and erroneously – that all of the Clipperton Island colonists had died. Rovira and his daughter and four grandchildren had a reunion so moving that a number of the sailors burst into tears. A small fund that the crewmen had established to help the survivors start new lives on the mainland was turned over to them. The local citizens were deeply grateful to the Americans for the rescue, and threw a party at a local hotel for the sailors and the survivors. Initially, Perrill had supposed Alicia Rovira Arnaud to be around forty years old. In reality, she was only twenty-nine, and the other women were several years younger. Nine years on Clipperton Island through an incredible gauntlet of hardships had taken their toll; however, eleven of the settlers had made it through. Their story was passed from person to person in subsequent years, and came to be known all over the west coast of Mexico.
Victor Emmanuel III of Italy finally made up his mind in 1931, awarding Clipperton Island to France. There have been occasional presences on the island since as the result of French/American military activities, scientific expeditions, and the occasional brief set of castaways. Ramón Arnaud Jr. even revisited the island with a team of biologists led by Jacques Cousteau in 1980; seventy-year-old Arnaud was pleased to see his place of birth in spite of the trauma. But no one has tried to live permanently on Clipperton since the last settlers were rescued by the Yorktown. Even without a crazed lighthouse-keeping rapist-tyrant, the island is very poorly equipped for comfortable human habitation.
Written by Marisa Brook.
All Blogs

Tonight was one of my most moving experiences ever – at sea on the Nautilus Explorer.
Tonight had to be one of the most interesting and moving thing...

Looking back on our 2013 Socorro humpback whale season
Well, the end of April marks the official end of whale season 2013.  Sure there a couple of straggl...