The Nautilus Explorer arrived on station last night and we could not be more excited about the start of this year’s great white shark season.  WHHHOOOEEEEEEE.    Waiting for end-of-day report on how the sharking went and hoping for some good pic’s when the Explorer gets back into port on August 2nd.  In the meantime, here is a fond look back at one guest’s experience with us last year.  Safe diving.  LifeLines for all!
– Captain Mike

What It’s Like.. To Shoot Outside the Cage – By Dean Karr as told to Terry Ward | scubadiving.com magazine August 2013 issue 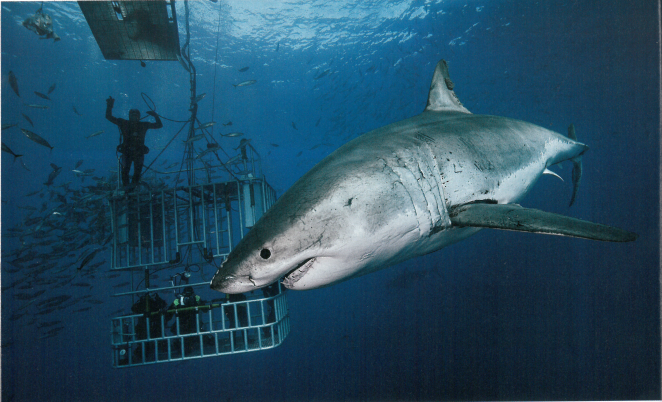 Photo taken from original article – scubadiving.com magazine August 2013 issue
I’ve dedicated my career to rock ‘n’ roll photography and directing music videos, but for the past decade, I’ve been going to Isla de Guadalupe off the coast of Mexico to shoot great white sharks.
The animals have a similar attitude to the rock stars I’ve shot, each with its own character. (You can tell a stinker from a real sweetheart.) I go out with a live-aboard that uses a submersible cage lowered about 40 feet off the side of the boat so I can get right out there in the open to shoot the sharks.
The rush of the submersible comes in descending. When you’re scuba diving to, say, 50 feet, you take your time, go at your own pace. We’re breathing on a hookah in the submersible instead of on scuba, and it’s a trippier sensation when you’re not in charge of lowering yourself.
Watching the sharks from this angle — versus seeing them from the surface cage — is a very different perspective as well.
Once we’re down, I’ll climb out and lay on my stomach on top of the cage, wrapping my feet around the airplane cable it’s hanging from so I can lean out and get as close as possible. The surface-supplied air hoses give us about 12 feet of slack to play with. It’s fun to jump off the cage and feel yourself floating  downward when a big shark comes by. Being outside the cage with them is the ultimate freedom. There’s nothing between you and the apex predator; it’s a complete rush.
I have a pretty huge camera unit, and I always know I can defend myself with that if I have to. I’ve had one of my dome ports bitten, that’s how close we get. Yet it’s so peaceful that I feel no fear. The big strikes usually happen at the top., by the surface cages, the sharks seem so passive when they’re down deep.
That said, I’ve been in the surface cage and seen sharks down deep chasing tuna as fast as they can swim — that tells me what they’re capable of.
Original Article (click to enlarge image): 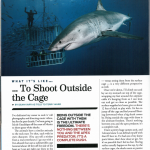 VICTORY: European Union Bans All Shark Finning! – By Justine Sullivan | oceana.org
Photo by: © Oceana/Carlos Suarez We at Oceana are thrilled to s...