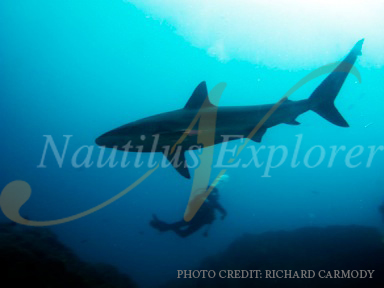 Roca Partida is truly amazing!  There are sharks everywhere.  This is the best diving that I have ever done!
—-
It is the greatest place I ever dive. Never saw so many sharks, tunas and many more on one spot. One of the best dives sites and defintely a place to return. A great variety of different sharks, schools of tuna and other fish. And then there is still the rock to be discovered.
Lost my weightbelt (6kg). Thought it was a one-time belt .
—-
I have never been on a place like that.
Every single dive at least 4 kinds of sharks and all of them came really close.
An experience I have never had before.
So lets see what the next days brings, I am really looking forward.
—-
WIR SIND UEBERWAELTIGT VON DER ANZAHL DER VIELEN HAIARTEN.
—-
This is my fifth time out to Roca and the shark action is like nothing I have ever seen. Day one here, I was floating around in the Zodiac waiting for divers to surface when I looked down at the water and there must have been 10-12 Silkies swimming around under the boat. They took turns coming up from the depths to swim at the back of the pontoons near the motor. They were right at the surface and coming in hot. A few times I thought they might try a taste of the pontoon. That same night, as we lay at anchor with the lights on, there were at least 100 of these sharks circling the Nautilus Explorer. They were everywhere. This morning, I was enjoying the breeze briefly by the compressor room at the stern when a silky shark came breached out of the water! I quickly tried to grab the attention of a few guests and the DM’s Tigre and Joel, but they didn’t believe me. This afternoon near the south point of Roca, I saw it again! Not 10 feet from the stern of the Zodiac a second silkie leapt from the water, clearing about 2 feet, rolled on its side in the air and splashed back to the water. Again, no witnesses, but I saw it! Off to Socorro Island tomorrow for the first time tomorrow and looking forward to it.
Max

Wish I had more room in my belly for Chef Enrique's delicious barbequed chicken… Socorro, Mexico. June 23, 2012.
After a mind blowing experience with the sharks at Roca Partida we made our way ...