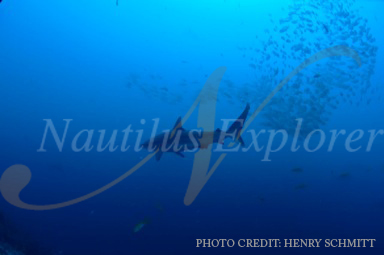 Well this morning finds our sleepy ship rising at a more leisurely pace as today is a non diving day while we make our transit from Socorro Island to the Sea of Cortez. We finished our last two days at San Benedicto with much more giant Manta fun at the boiler. Over the last two days our dives at the Boiler were outstanding. The first day back, the seas were up a bit at the boiler, but as our divers were to find out often there is a big positive along with the negative. The seas made if harder getting in and out of the water to go diving but once there the effort was well worth it. Dolphins, as they often do come riding in on the waves to play around the boiler and with no current, the mantas were feeling lonely as almost no one ventured on to the cleaning stations for the mantas but stayed on the outside of the boiler and watched the dolphins entertain us. We called it after two wonderful dives and moved over to the protection of the east side of the island for a couple of dives. Our last day the conditions were much better and improved throughout the day. More great dives with the mantas but our young tiger shark took center stage for at least two of those dives. Coming in and out of the blue and in one sequence, one of our guests captured the tiger taking a fish on video.
As it was on our last trip temperature was wildly variable at the Boiler, mostly 74-76F or 22/23C but on the last dive dropped dramatically with upwellings to 69F/19C. Vis was excellent from a crystal clear 120+ to a Hazy 100′. A great way to end this portion of our trip to the Revillagigedo, watch for the next report from the Sea of Cortez as we head north towards La Paz and Espirit de Santos.
Captain Al

Speechless!!!! Tiger shark + spawning event and millions of larval stage crabs? Is that why the diving is so outstanding right now?? Socorro, Mexico. June 19th, 2012.
Day 1. The arrival to San Benedicto is always greeted with the co...

100 silky sharks circling the Nautilus Explorer at night. And then 2 different silkies breached out of the water. Socorro Island. June 22, 2012.
Roca Partida is truly amazing!  There are sharks everywhere.  This is the best...