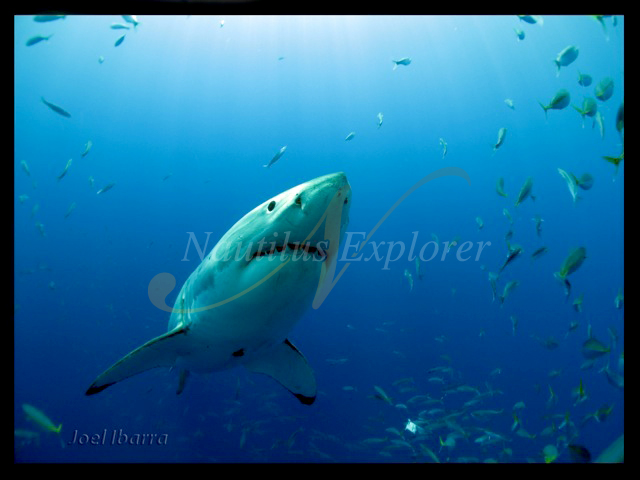 How was your day at Guadalupe and with the Great Whites??? BLOG IT OFF, DON’T BE SHY
August 5th, 2012: today was a good day. We arrived at Guadalupe Island last night and woke up to the most beautiful panorama this morning. It was going to be my first dive with great whites and it felt like Christmas!!!! The Nautilus crew is very accommodating and they make sure you have everything you need to be safe and have a great time. I dove with Juan, one of the dive masters and he was phenomenal. During this dive, there were 2 great whites in particular that seemed very curious with the strange animals inside the cages and circled around for almost the entire time we were under water. They came as close as physically uncomfortable for some of us, close enough to stare you in the eye with own his dark eyeball. What graceful creatures! They are even more beautiful and fascinating this close up. Anyone out there considering this intimate experience with a great white shark, I can tell you the Nautilus Explorer Crew here with us on this trip are the best!!!! We have a very international visiting crowd from the US, UK, Belgium, Canada and myself from Brazil; everyone looks very excited and pleased.
Merry Christmas!
Milena
—-
Ok new trip. We got on spot last night with a whoooole new group. We got france, brazil, eeuu, mexico, Canada. You name it, we got it!! Excellent group to mix things up and practice my French even I think I will be fluent by the end of this trip. So we had the cages in the water since six thirty this morning and low and behold one of our friends was already there circling waiting for us one of the big daddies toooo . By the end of the day we had four maybe even five circling close first day and the volume’s already juiced up wowsers.
Buuuut, nufff about sharks, I wanna talk about the cloud drift that flows like a blanket over one of the ridges on the mountain right here in front.  Maaaan, you can’t believe it. This cloud flows constantly over this ridge just like a blanket and drifts off and withers away is kinda like a waterfall, a slooow smooothe waterfall that disappears into thin air. Kinda reminds me of this wicked purple blanket that I got and use for special occasions. I really like the color yellow, but I got someone that loooves purple and if truth be told, the blanket’s not mine, its jo’s, but if you seen this blankey you gonna wanna have it for you!! So you probly thinkin, what’s a special occasion for blankey??? Its for readin‚ on the beach but you gotta find a nice spot behind some rocks to give you protection from the wind, and even then its chilly and that’s where the blankey comes into play.  Like I says, you wouldn’t believe, but this cloud blankey is usually flooowin for houuurs at a time.
I don’t know where the clouds come from but there seems to be an endless supply. Now, howww cool would it be to be right on that edge where the cloud rolls over the edge, right underneath the edge. AND HAVE THE PURPLE BLANKEY THERE AAAAAAAAND HAVE JO THERE!!!! Now, I know that’s kinda lots to be askin of the universe but I bin told that you have to belieeeve and there’s nothing wrong with believing and maybe even a little dreamin… and that’s dreamin with yur eyes open. Today we not dreamin bout little sailboats anchored in the moonlight or flakin off to chile, we sittin on the top deck checkin‚ out that cloud, and letting that cloud take us somewhere.
TIGRE (divemaster)
—- 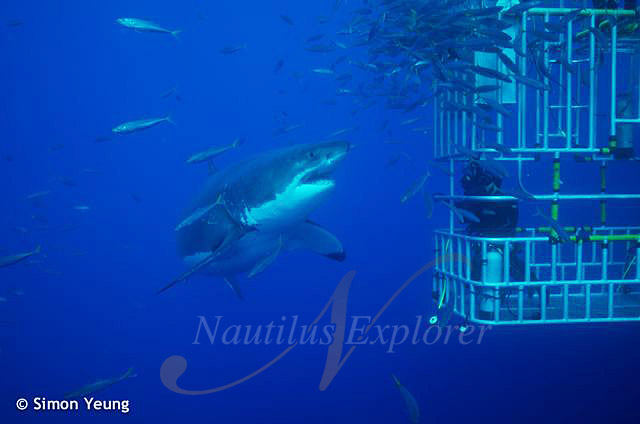 Annie five (pale and ghost-like Canadian)
Day started with a beautiful sunrise over the cliffs of Guadalupe and it only got better from there. The crew got the cages ready and off we went.  Sharks, fish, dolphins, a turtle, excellent grub and a cold beer. Really can’t get any better if you ask this girl. Was a little naïve and fell for a trick that most five year olds know, but hey got an underwater kiss as a result (wink wink)!! We will see what the rest of the trip brings, but really I can’t think of one thing about the day I would change and look forward to seeing what the wildlife (crew included) will do tomorrow.  Later!!