This is my first time out to Guadalupe and it was an unforgettable experience, the weather was perfect and the sharks showed up in big numbers and big bodies. We have achieved all of our objectives on this Imax film, and Mother Nature, as well as our film crew along with the Nautilus Explorer crew, made it all possible. The boat was great, the crew was exceptional and the divemasters were the best. Thanks to all. Oh yeah, the food was excellent too, special thanks to Carmen who waited on us at all times. I only have one question, where does Tigre get his name??? Keep your eyes open for the Imax great white film coming out in about eight months.
–Dave (line producer of the film)

Excellentisimo on all points. I’ve been out to Guadalupe four times so far we were here to film sequences for the great white shark Imax 3D film, I am the co-producer and director of photography for the film we had an amazing three days, plenty of sharks, big and small the boat has an excellent platform for filming and the crew is a first class crew that made our job easy. Thanks to all
–DJ

Hi, my name is Kennedy, I’m ten, DJ is my dad. I saw sharks for the first time and they were awesome. Also, I dressed as a shark for Halloween and Carmen let me be her helper for the trip. They had amazing food I got a giant cookie.
–Kennedy (10 years old)

72 submersible white shark dives in 3 days and we batted 100% on shark sightings
With our surface cages in the water, we opened up our deep cages and the shark a... 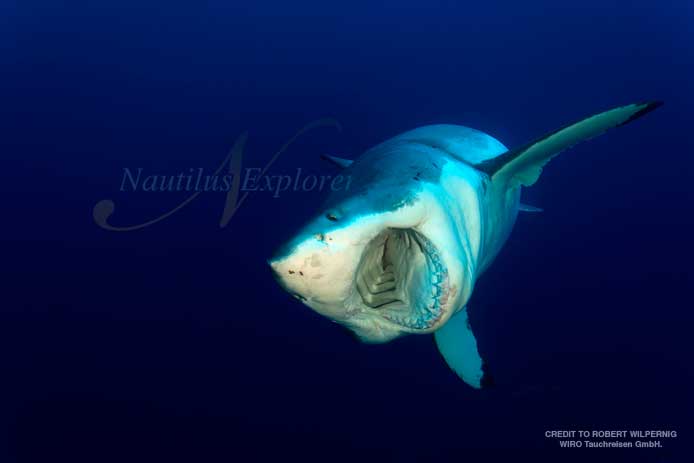