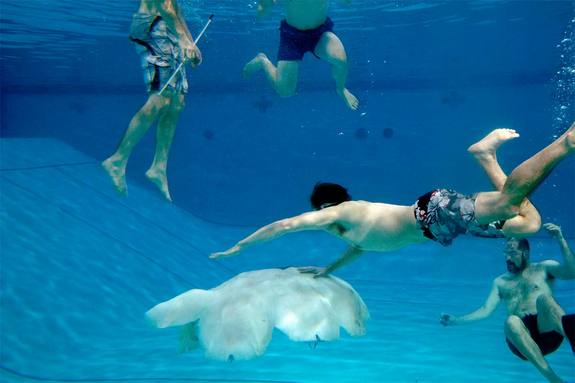 Virginia Tech graduate students test Cyro, a man-size jellyfish robot, as it moves up and down underwater.
Photo Credit: Virginia Tech
A giant, slimy, tentacled robot modeled after one of the world’s largest jellyfish could be a precursor to self-powered, autonomous robots that monitor the seas, map the seafloor and even reveal secrets of marine life, engineers say.
Dubbed Cyro, the newly unveiled robotic jellyfish is a scaled-up version of another mechanical swimmer, this one the size of a human hand, called RoboJelly that was developed by the same team of researchers at Virginia Tech College of Engineering.
At 5-foot-7 (1.7 meters) and weighing 170 pounds (77 kilograms), Cyro is the jelly equivalent of an average human guy.
Jellyfish make great models for self-powered and autonomous bots partly because of their relatively low metabolic rate, meaning they can move through the sea on little energy. They also come in various sizes and inhabit a range of aquatic habitats from shallow coastal areas to the deep-sea, meaning engineers have plenty to work with when looking for a mimic for particular uses.
Cyro is modeled after Cyanea capillata, or the lion’s mane jellyfish, whose bell stretches about 5 to 6 feet (1.5 to 1.8 m) across, with some observations suggesting the bell can reach 9 feet (2.7 m) across. The robot mimic also has a central “bell,” this one holding the creature’s electronic guts, with a thick layer of squishy silicone meant to mimic jellyfish skin covering the entire creature, Alex Villanueva, a mechanical engineering graduate student at Virginia Tech, told LiveScience. [Video – See Cyro the Robotic Jellyfish in Action]

The robot’s arms, which are powered and controlled by the central electronics, move radially from an outward position in toward the center. That radial “musculature” triggers the pulsing motions of the artificial mesoglea, or the gelatinous substance that makes up the jellyfish’s skin.
The research team tested the jellybot in Virginia Tech’s diving well, a 14-feet-deep (4.3 meters) swimming pool, where Cyro showed off its vertical know-how, moving from 8-feet-deep (2.4 m) to the surface with just five complete pulsing motions, said researcher Kenneth Marut, a graduate student in mechanical engineering at Virginia Tech, during an interview.
Cyro is still in the prototype stages, and so years away from real deployment in the seas, the researchers said. The team, which also includes graduate student Tyler Michael, is working on horizontal movements, as Cyro currently can move only in the up-down direction.
“We hope to improve on this robot and reduce power consumption and improve swimming performance as well as better mimic the morphology of the natural jellyfish,” Villanueva said. The team also hopes to learn about the real McCoy.
“Our hopes for Cyro’s future is that it will help understand how the propulsion mechanism of such animal scales with size,” Villanueva said.
Both Cyro and its smaller cousin RoboJelly came out of a $5 million, multi-university project funded by the U.S. Naval Undersea Warfare Center and the Office of Naval Research. The engineering team is led by Virginia Tech mechanical engineering professor Shashank Priya.
By Jeanna Bryner | LiveScience Managing Editor
Original article: http://www.livescience.com/28286-jellyfish-robot-cyro.html

Big thank you to the Mexican Navy
Socorro Island in the Revillagigedo Archipelago is a jewel in the eastern Pacific ocean.  The islan...

VICTORY: European Union Bans All Shark Finning! – By Justine Sullivan | oceana.org
Photo by: © Oceana/Carlos Suarez We at Oceana are thrilled to share this news ...