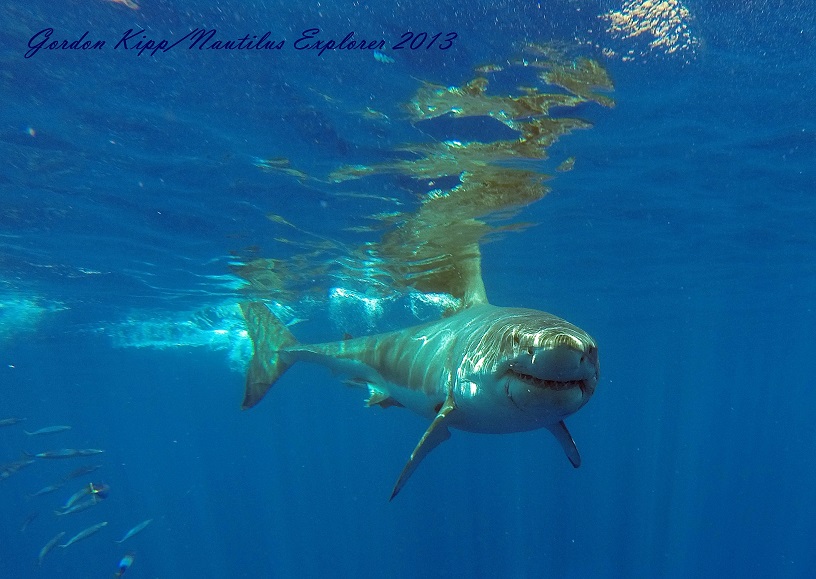 There have being reported 11 different species of sharks at Isla Guadalupe,
According to the UN data, in 2009 there were captured in legal fishing operations 720,000 tons of sharks, whereas illegal poaching of sharks for finning captured 1.7 millions of tons equivalent to 38 million of sharks.
This is one of the reasons why shark diving is an enormous opportunity to let people understand and care about this magnificent animals that are really well adapted to this environment.
In the past, shark diving operations used fish grinded mixed with sea water to attract the sharks to the boat.  There was also a piece of fish attached to a rope that swings in front of the cages to offer tourists a better opportunity to see the sharks.
The last years the company Nautilus Explorer has being changing paradigms regarding this activity and is not using chum or baits any more.  To attract the sharks, the company uses a piece of tuna into a mesh sac made of natural fibers that slowly releases some tuna scent into the sea –like a tea bag.
This scent makes the shark curious enough to approach the boat but without displaying a predator behavior that costs a lot of energy, making this kind of operations more ecologically suitable.

Conservation Objectives at Isla Guadalupe
The main purpose of the establishment of the Reserve was to prote...

Guest blog from Guadalupe – diving with these great white sharks is one of the coolest things I have done or will ever do in my life
What can I say from our first day? We got a big male great white shark doing bea...