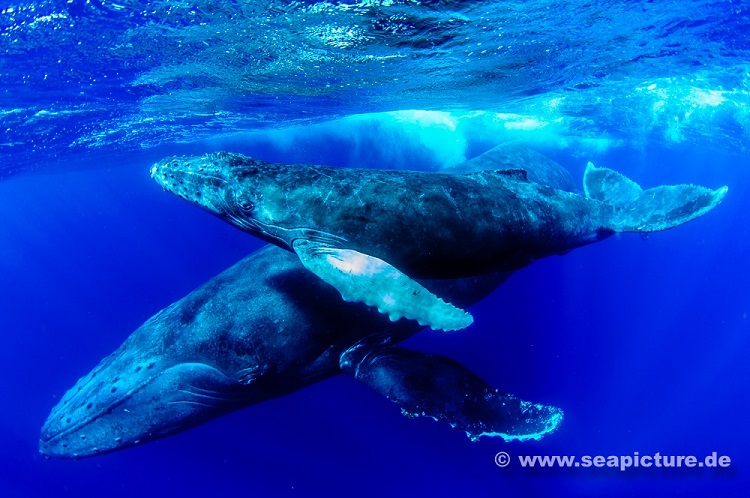 Every year, approximately 1200 humpback whales (megaptera novaeangliae) migrate from Alaska down to the Revillagigedo Archipelago (which includes San Benedicto, Socorro and Clarion Islands as well as Roca Partida).  Heck, how can you blame them?  We do the same thing.  Many people go to Mexico in the winter for the weather, the beaches and for a bit of frolicking.  Humpback whales do the same!
Here’s the thing – the humpback population in Alaska has bounced back from near extinction to an estimated 22,000 animals.  This is miraculous  considering that there were fewer than 1000 whales left hiding in Alaskan waters after the 19th century whalers decimated the population.    Some of the humpies stay in Alaska year round.  We see some animals in British Columbia.   And every fall, groups of animals migrate south to the Revillagigedo’s, Hawaii and Tonga to birth and mate.   Yup, that’s what we see at Revillagigeo’s  –  whales who have swum over 2000 miles to either give birth or mate.   One amazing thing about this is that they do the whole thing on a full stomach unable to feed  until they get back to the north pacific in late spring.
Alaska is where the smorgasbord is.  The first whales arrive in the islas in December and it’s game on by the middle of January with combative males fighting to be alpha and win the “affections” of a female –  we’ve actually seen 45 foot humpbacks ramming into each other!  Can you imagine the forces involved which are well evidenced by bloody injuries. One of the great pleasures of our trips at this time of year is that we often hear the male humpbacks singing during our dives.   One of my most brilliant memories is free diving down to 40 feet in crystal clear blue water following a giant manta ray while being serenaded by a nearby humpback whale.  amazing memories.  Sometimes you can even hear the singing as you lay in your bunk at night!   Nobody knows why the males sing, but my personal and somewhat obvious theory is that it has something to do with impressing the females!  This also the time of year that we see cute baby humpies accompanied not just by their mum but also a second adult female who acts as a companion.  And possibly a diversion for aggressive males!
Yes, we do sometimes actually see the whales during our scuba dives.  And it’s quite common for patient guests to snorkel and see the humpbacks.  It’s all part of the mystique and beauty of the Revillagigedo’s.   Dive safe.
-Captain Mike

looking back on our New Year's trip – there were dolphins at the window as we were having breakfast
What a way to start this Socorro trip, with the calm weather and ...

2 replies on “The humpback whales have arrived at Socorro Island!”

Hi, do you still see humpbacks in late April? When is the most optimal time to see them? Thank you.

At Socorro, you can see humpback whales between January and April.