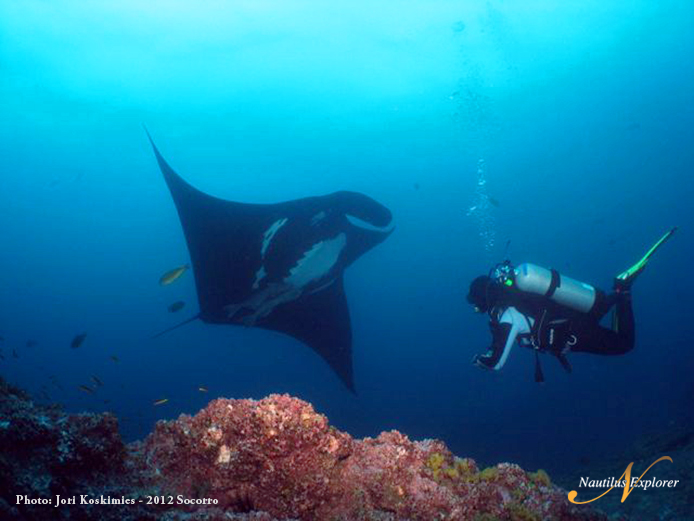 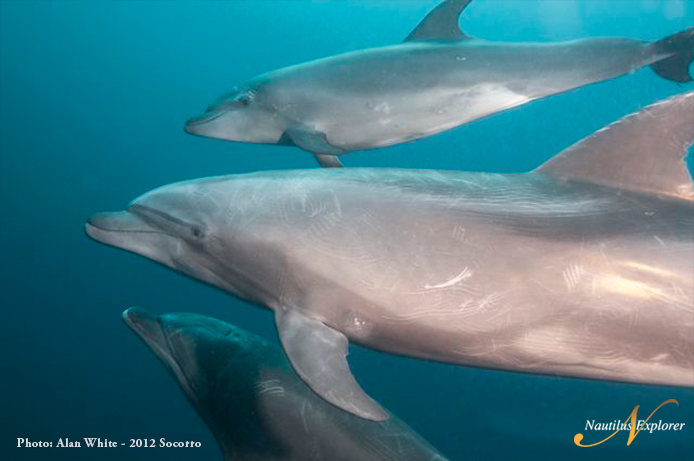 Sharks has been the word of the past two days here at Roca Partida, part of the Socorro chain of islands 250 nautical miles south of Cabo San Lucas, Mexico. After playing with the Giant Mantas at Socorro Island we made the overnight run to Roca Partida and have had 8 fantastic dives over these past two days. Schooling hammerhead sharks on several dives, schooling Galapagos sharks, silver-tip sharks, silky sharks, and of course the numerous white-tip sharks piled one on top of the other in the ledges along the wall. If you don’t like sharks, there are always the dolphins. Roca Partida is a rich feeding ground for bottlenose dolphins and when they are not hunting they will often join us on our dives for some playful interaction. We spotted them on several of our dives and had one dive where approximately a dozen dolphins spent nearly 20 minutes entertaining us with their underwater acrobatics.
Huge schools of big-eyed jacks, black jacks, trevally jacks and yellow-fin tuna occupy the rest of the water column always on the hunt for the smaller fish that live near the rock.
Conditions this week were great with well over 100 ft of visibility and a mild current on most dives.
Tonight we make the overnight run to Isla San Benedicto to finish off this expedition with more Giant Mantas at “The Boiler”.
From the Captain.

We spied our first humpback whale of the season at Socorro Island. Baja California, Mexico.
We are now halfway through this our latest expedition to t...

The Boiler at San Benedicto featured loads of great manta interaction or manta loving' as we like to call it with a least 5 giant mantas. San Benedicto, Socorro Island, Mexico.
Today was our final day of diving for this Socorro Expedition and for our grand ...