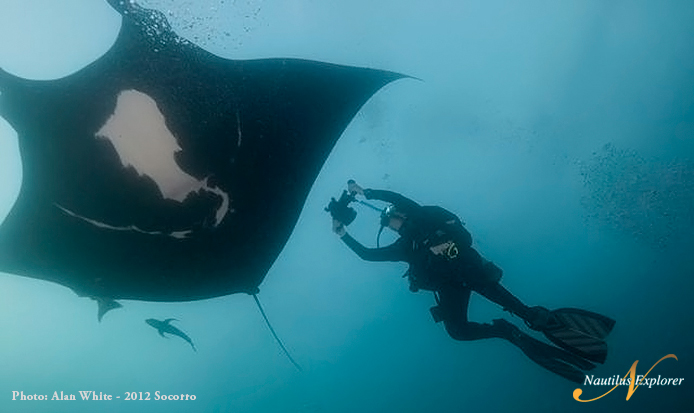 We are now halfway through this our latest expedition to the Socorro Islands, 250 nautical miles south of Cabo San Lucas in the Pacific Ocean. For the past two days we’ve been diving at the infamous Roca Partida, a small rock poking up out of the ocean 70 nautical miles from its nearest neighbour, Socorro Island. Roca Partida above water is the top 100 ft of what is actually a 10,000 ft underwater volcanic mountain.  It looks inconspicuous enough, covered in boobie bird guano as it is and looking quite small sitting alone surrounded by hundreds of miles of open pacific ocean. As we approached the rock two days ago we spied our first humpback whale of the season, a solitary animal who gave us its tail fluke in greeting before disappearing from sight for most of the day. Its songs would be heard by us underwater however for the next two days of diving, a beautiful accompaniment to a dive.
In our two days of diving we enjoyed almost everything that Roca Partida is known for, including schooling hammerheads, galapagos, silver-tip, silky and white-tip sharks, huge yellow-fin tuna 200 lbs plus, schools of hundreds to thousands of black jacks, cotton-mouth jacks, creole fish, and assorted others. Vertical cracks in the rock are home to countless green morays, living almost piled on top of one another by the dozen in places. A pod of bottle-nose dolphins could be seen surfing the waves and hunting around Roca Partida on both days, and on a couple of dives our divers enjoyed some very up-close interaction with them. Two dolphins in particular placed themselves in a vertical orientation in the water near the divers and allowed themselves to be approached to within touching distance.
Visibility for these two days at Roca was below average unfortunately, at times down to around 30ft. On our very last dive of the two days the rock was quiet. Our cue to move on to our next stop, Isla Socorrro.
Captain Gordon Kipp
—
Surface conditions: Winds light to moderate (5-15kts), sea height 4-7 ft, skies mostly cloudy with sunny periods, air temp 75F (24C)
Diving conditions: Viz 30-60ft (9-18m), water temp 75F (24C), current mild to moderate

It took quite awhile for my heart beat to return to normal. Socorro Island, Baja California, Mexico.
Well, how could it get any better than three fantastic dives at t...