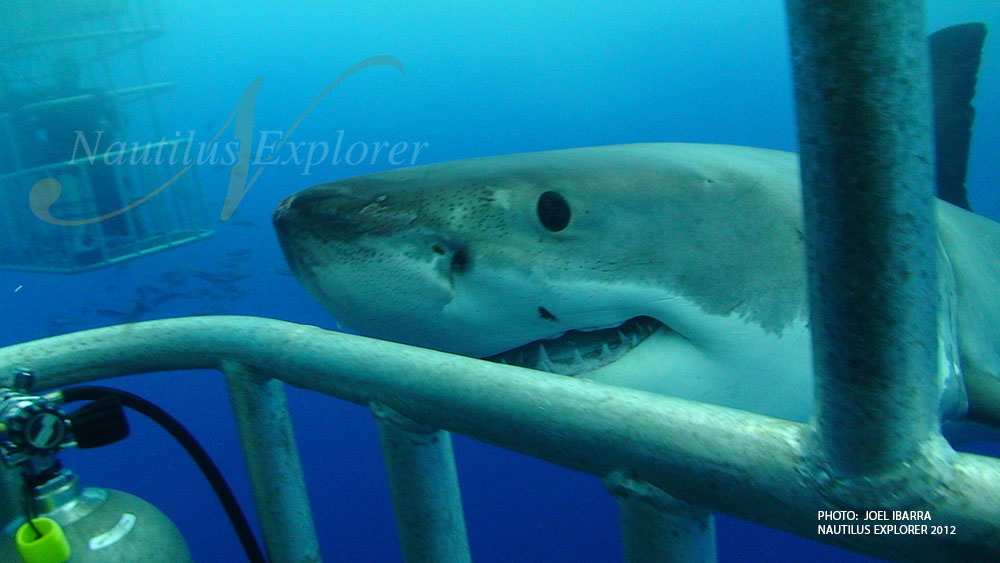 Yes, and we have video evidence! Today was incredible at Guadalupe Island.. The bowel movement of the great white shark pooping wasn’t necessarily THE highlight, but it was pretty awesome (except for those who were trapped in the cage down current of the shark poop). The sharks were amazing today. If today was the only day we dived, I think everyone would have gone home happy. They circled the cage over and over and over. A few people got some love taps. The photos and videos by everyone in the group are so much fun to relive it all. At times, the sharks glide by so peacefully it’s magical to watch. At other times, when someone (and we won‚t mention who˜SHANNON), sticks her GoPRO camera out on her monopod, we‚ve noticed one particular shark does not like it at all. But it does provide for some great footage 😉 All in all, this trip has been awesome. The crew is great. The sharks are beautiful. And we have another day of diving to add the icing to  the cake!

First day with the whiteys was s**t hot! (*note from Captain Mike : in the interest of social media integrity, I felt it improper to change this comment!!*) Guadalupe. October 1, 2012.
It‚s a long way to travel from the UK and the question is. Is i...

My name is tim, I had the most rock bottom expectations of this Guadalupe Island trip. Guadalupe. October 7th, 2012.
Since I was going to Vernon, tx for a week every spring break in texas.we had to...