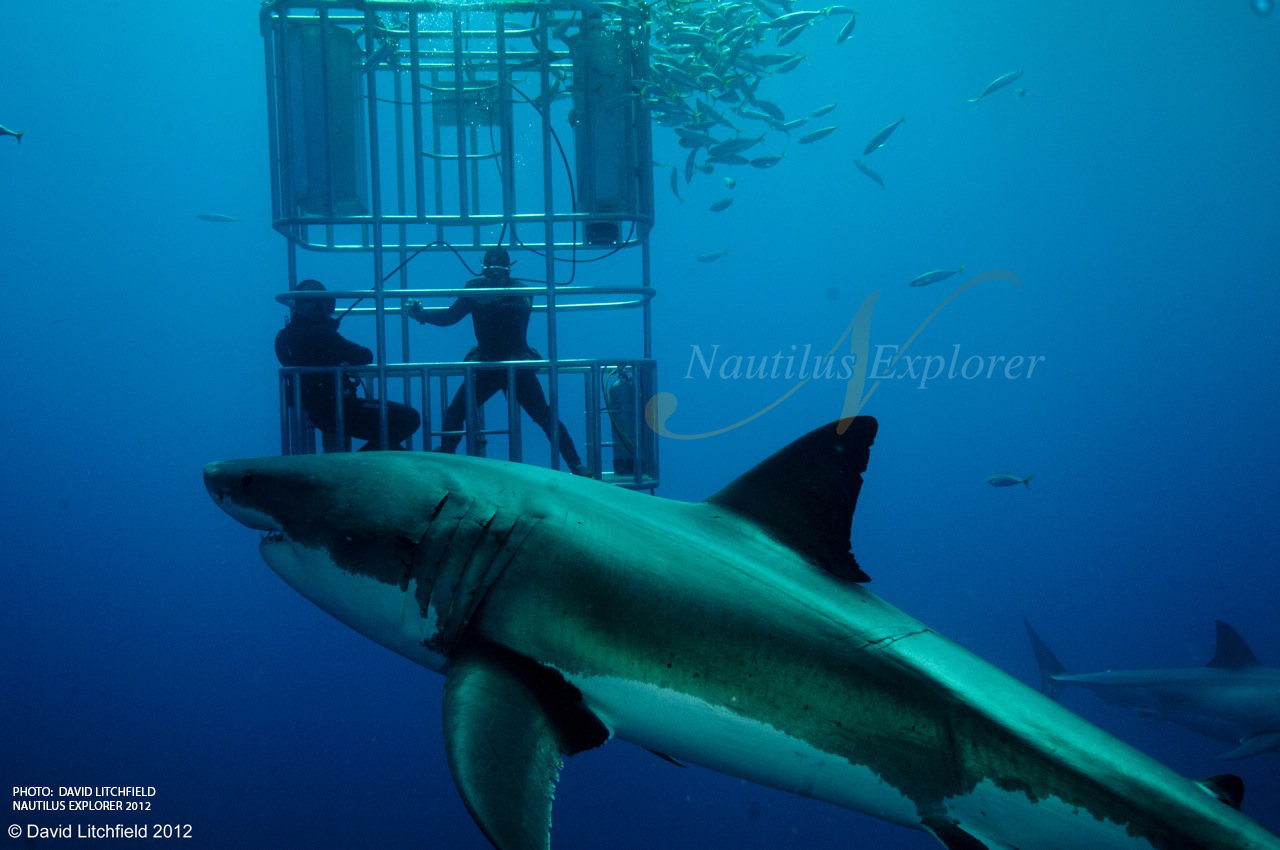 Epic, only epic, unbelievable, ahhhhhh…words… the largest great white we ever expected to see came right to the cage and smiled at us!!! Circled around a couple of times, came under the cage just for another hello! One last thing, I was with two best friends, my husband Shawn and Ziggy!!!!
Dodie
My day was awesome, you know what the greatest thing was, being with all these divers and Stan Waterman, I’m watching this video that Monty took and it’s so unbelievable, reminiscing about the movie the deep, hearing the funny stories from back then, I’m having a great time!!!! the crew is the best, we put in with bad weather this morning, moved to another location and you didn’t have to do that, the captain and staff went out of their way and I’m really impressed, somebody that was not top-notch would not have done that.
Anette

We woke up this morning and we did three dives, saw no sharks, then with all despair the sharks came back for the last dive and it turned out to be the best one so far, the lesson learned is never give up and give it all you got, and also bring Paul with you!!!
Lionel
I’ve been on six great white trips on this boat, I’ve seen lots of sharks, lots of sharks, this afternoon, I saw a great white surface off the back of this boat that I thought was an orca, the biggest white shark I’ve ever seen!!!!! its back came out of the water, it wasn‚t just a fin, this thing semi-breached and it looked like an orca had come up for air and gone down!!!
Leslie
Today was impeccable, we saw the largest female shark of the trip, she had to be nineteen to twenty feet, and we saw everything!!! Left ear didn‚t cooperate at first, based on tiger‚s recommendation I stayed in the surface cage, rested the eardrum and went back in till sunset!! In the surface cage I saw two sharks, the male and the female, so basically the surface cage was rocking too so I dint miss out on nothing!!!
PDF (Paul David Ferrante)
Martha has been a true sport, she was only snorkeling and hooting and hollering, and the first time I’ve seen someone only snorkel in the surface cage!!! Nobody has ever done that!!!! And she went without a wetsuit for a bit, but no diving for her!!!
Tigre
To see Stan Waterman, Chuck Nicklin and Krov Menuhin diving together made my trip… it’s not just about the diving…  it’s about the people and the life-long friends that we make. That’s what it’s all about.
EJS

Today I danced with the most beautiful woman in my life and she was three thousand pounds: Guadalupe Island!! – Guadalupe, October, 27th 2012
We have started this amazing journey to meet Mr. Big, the great w...