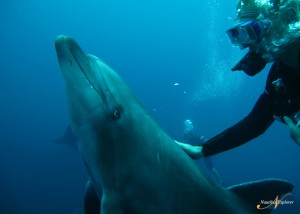 Had blasted out two good dives in the morning, then topped it off in the afternoon in this wicked little spot, not gonna tell you the name because its for me to know and for you to find out.  Anyways, in this quaint little spot, there are some rocks coming out of the water and you can do a circular pattern around the rock, but, there’s a swim-through that penetrates this rock from one side to the other (about a twelve meter swim through the tunnel) The thing is chock-full of mini sardines, all shimmering‚ their lives away!!  You can see that there’s light at the end of the tunnel, but you can’t see through because of all the fishies. Wicked, simply wicked. Gotta admit, its kinda narrow in there, plenty of lateral room (bout a meter and a half), but only about a meter high, just enough room to comfortably get through (because you got the tank on your back, and I got a steel tank because I’m a scuba stallion, and those suckers are big).  Got that sucker on the GoPro also!! The thing about the GoPro is that you gotta take it with you all the time, every time, because you never know what you are going to find or bump elbows with down there.
I remember this one time in Socorro that I went down to put the anchor reference for the dive, a two minute job, drop down, put the anchor and back up. I thought about it, take the GoPro!!! Then no, it’s two minutes, I don’t even got a chance to look around. Needless to say, coming up, whale shark in my face, a meter away, all alone was a glorious moment, but I didn’t get in on the GoPro!!! I could say that I don’t care, I didn’t want it on video, but it’s not true!
So we’re cruising around the Sea of Cortes, and I have to admit that this place reminds me of the Mediterranean in the summer (did two years diving in Sicily, and a six month stint in Greece). We got flat calm sea, little islands all around,sun reflecting off the surface of the ocean in an unforgiving manner, and the heat!!! Mama Mia!!!! I always tell people I’m Cuban, I’m tropical people, I leave the cold for Europeans and it’s true, I dig the heat, and let me tell ya, its hot!! In Africa, there’s a desert called the Sahara, I was there a couple years back, it borders a bunch of different countries, I hit it from Tunisia, border town called Douze. Now, I’ve been to the Sahara, and it wasn’t this hot!! Even my coworkers were laughing it up when they saw me sneaking inside with the guests (and more importantly the A/C) after coming out of the compressor room, saying, aha, I thought you were tropical people!!! I gotta admit, when its smoking outside, there’s something so pleasant about coming into the A/C. I can admit that, even being tropical people!!
I wanna give a shout out to Lynn who’s onboard again this trip also, Lynn’s gotta be the most positive awesome scuba dude ever ever ever, and he showed this video he made of the white sharks and the trip we did together about six months ago (I was dancing disco style on the cage and he got it on the clip, looks great with music, gotta get a copy)..Lynn, you’re a true scuba stallion as well!!  I also want to give a quick shout out to the monster snappers I saw this morning, hiding in a ledge, big daddies, eye contact, what and animal! If an avid spear-fisherman had seen that same scenario, his heart rate may have increased a bit.
– Divemaster Tigre
July 2, 2013
Another sumptuous dinner from Juan-Carlos and a ridiculously haute-cuisine dessert from Benoit are being digested as I type. Three marvelous long dives today, mostly in the shallows where it was warm and bright. To be fair, the conditions with respect to visibility have been quite awful, but the crew figured out a way to provide us with dive locations suitable for both the beginner and advanced re-breather divers on board this trip. I cannot speak enough about the caring dedication and devotion of this crew. We were steaming along heading to our latest destination when a pod of dolphins happened upon us riding the bow wake and presto! They just stopped the boat and announced that we were going snorkeling with the dolphins. They lowered the zodiacs while we scrambled to get our suits and masks on (these guys are quick!). We spent 30-40 minutes with dolphins around the Sea of Cortes. Some of us got to hear them, though it quickly became apparent that the dolphins only wanted to play with the boats. We witnessed some big jumps though only 100 yards away, well worth the jelly fish stings! Anyway, I digress, my point was that I don’t know too many dive boats that would even consider altering a fixed schedule for the sole purpose of making their guests happy. Suffice it to say, I am one very happy guest!
– Julie, Canada

Socorro Season Drawing to a Close
Looking back on one of our last trips of the season. One Sea of Cortes trip to look forward to board...