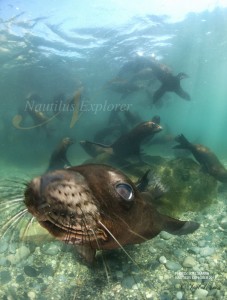 Note from Captain Mike: Report just in on errant unusually aggressive behaviour from a dominant male sea lion at Los Islotes.   More to follow…
I didn’t tell my wife to check the blogs, but I’d like to tell er I had an awesome trip as usual on the Nautilus Explorer and the crew could not have been better. While I was gone, we celebrated a happy forty three years together and forty one married. I never get mushy but I miss you.
– Lynn (Arroyo Grande, California)
I enjoyed diving with Tigre Mal-Amado and my friend Mone Que es un Cabron and the crew is first class.
-Jose (Mexico City, Chilango)
Another trip of a lifetime with the Nautilus Explorer, the crew is top of the line as usual, and the food was yummy (delicioso)!!
– Cynthia and Monte (Santa Barbara, California)
Sweet Melissa did her fifteenth open water dive today, more than most advanced divers. Congrats Melissa!!
– Monty (Santa Barbara, California)
This is my first time on the Nautilus, Monty was disappointed I didn’t bring enough bathing suits. I only brought four!! Seriously the crew was excellent and I can’t wait to come back and do another trip with you guys. I think Matt and I will go and do a trip on the sister ship – the Swell in Alaska!!
– Ashley (San Diego, California)
Ok, Final thoughts by Tigre. Excellent trip! One of our captains, Captain Al, always mentions in the briefing that our guests make the trip, the crew feed off of the vibes of the guests and vice-versa. With a group like this one, what can be expected but a magical trip!! Great people, great attitudes, smiles around the house, wonderful weather (something pleasant about diving when its sooo steamy hot, getting into the cool water makes it all the more enjoyable), and the Americans onboard are celebrating their Day of Independence by drinking Mexican beer!! Woohoo!
Give a big shout out to our Cappi Gordon on this trip who led the way for this awesome trip, the entire crew; especially my co-scuba-stallion-divemaster magic Juan (who is also the only Juan), also a shout out to two of our guest on this trip; Mike Morgan and his girl Melissa (Mike is Bev Morgan’s kid, though he’s no kid), a true gentleman and scuba-stallion. His Pop Bev needs no introduction, living legend who’s been on the ship before but I didn’t have the honor to meet. Bev, if your ever in Cabo and want to go spearing for food, you got a place to crash!! Also, a shout out to Jo(Jooo). What can we say to Jooo?? Been thinking about you Jooo. We still in the doghouse, Ah Jo? I tell you what, whoever’s in the doghouse probably did something to deserve being in the doghouse. How you get out of the doghouse?? Flowers? Noo, flowers is for something different. I think Jo is in the doghouse too. Is it possible for two people to be in the doghouse together? That could be comfy if there wasn’t thousands of kilometers between one doghouse and the other. ..haa. Also shout out to Pat!!! Guadalupe white sharks HERE WE COME!!
– Tigre (Divemaster Extraordinaire)

TIGRE HERE, DAILY REPORT! LETS DO IT!!!
Had blasted out two good dives in the morning, then topped it off...