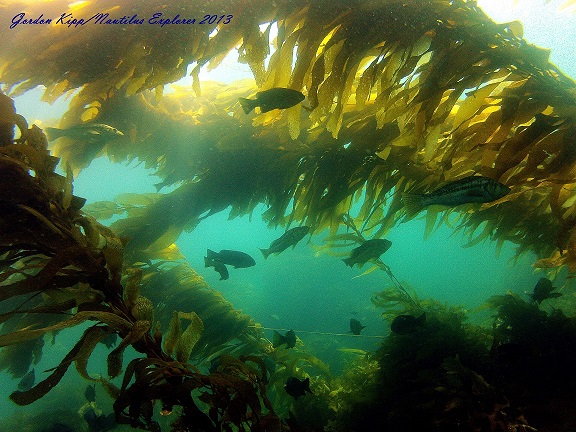 Hostess Carmen and I got our dive gear ready and in a flash were headed out on one of the skiffs with 1st Mate Shaun at the helm. We dropped down in a kelp forest just off Isla Cedros and after a few minutes of adjusting weights we were off! I can’t remember a time when I had had more fun with a dive buddy! We glided about underwater and played in and amongst the kelp fronds. I felt at times as if I was in an enchanted forest, we would swim into a dense patch and the sunlight would be blocked out above making the sea bed below dark and mysterious. Then we would swim out into a clearing and the sun would beam through the fronds casting a golden glow over the sea floor. Carmen and I made a game of swimming along then abruptly turning around to confront the Garibaldi, California sheep head and the numerous kelp bass. The Garibaldi would give us haughty looks, the sheep heads would largely ignore us and the kelp bass would pointedly pretend they had not been following us, peering at us indignantly from the corners of their eyes. At one point Carmen and I both lay on our backs, anchored ourselves in the kelp and gazed up at the surface. The water was so calm that the only way I could tell where the ocean ended and the air began was to watch for my bubbles to expand as they reached the surface.  The sunbeams were shining through the kelp on such an angle so that they burst into multiple rainbows and came raining down on us. We continued on our way playing peek a-boo with one shy harbor seal and a few curious sea lions. Carmen and I had so much fun I couldn’t help smiling the whole time. I think I had to clear my mask a record amount of times in a single dive because of the leaks that kept forming at the corners of my laugh.
– Tiare

The seal colony was great! So playful!
– Rolf

The photo opportunities are great! divemaster Joel’s animal photos have inspired me, he knows about composition and what will need for good light as well as positioning. The seals make for very interesting photos and I get great photos even without a lot of experience!
– Andrey

This trip on the Nautilus is surreal. Diving with great white sharks has been on my bucket list since I was 7 years old. Was it worth the wait?? H*LL YEAH!!!!!!!
I had high expectations coming into this trip and to be honest th...

No great white sharks??? October 29, 2013
Sharking on the Nautilus Explorer is consistently excellent at Guadalupe Island.  We have had an am...