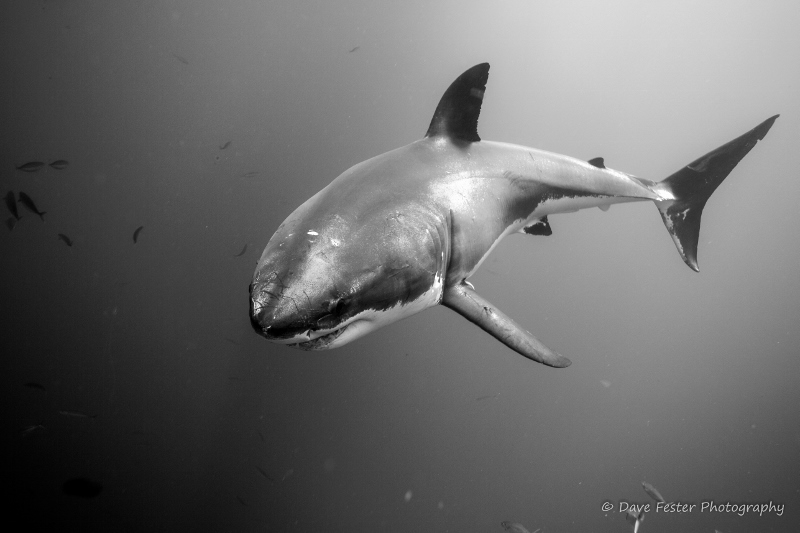 It was my first day of working as a deckhand on the Nautilus Explorer and my very first (and long anticipated) dive with great white sharks. I spent the day painting and scraping and generally making the boat ship shape while lending a hand to the divemasters and other crew. By the time the last dive of the day rolled around, I almost (but not quite) forgot about getting down in the cages myself! I suited up and climbed down into the 6 ft cage with Ed Stetson, one of our honorable guests. The water was aquamarine and filled with little baitfish, mackerel and an occasional distant tuna. I came down into the cage and Ed grabbed my wrist and guided me to the edge of the cage. Out of the blue slowly and almost invisibly glided the biggest shark I had ever seen! Obviously a female due to her size, her mouth hung slightly open showing off rows and rows of pearly white razor sharp teeth as she cruised casually and silently by. As her tail passed by the cage I saw her caudal fin was quite bent, so this was Lucy everybody had been talking about! She was huge! I may have caused the Ed‚s hand I was holding to momentarily loose blood as I might have been squeezing harder than I planned. Just as I was recovering another shark came up to the deep cages! And another! Ed couldn’t direct my attention fast enough to see all that was going on! I could not take my eyes off them! One of the dive masters signaled me to come up so I could catch the last cage of the day. Deckhand Noah and I descended with Captain Tim as the divemaster and all of a sudden we were in the midst of 5 great white sharks!! Poor Noah, he may have suffered the same fate of Ed as I might have involuntarily squeezed his arm a bit hard. One of the sharks was bigger than Lucy and another one slightly smaller had a wicked scar on her gill plates (I later learned from local shark biologist Mauricio that this was inflicted most likely by another great white). The other sharks were “small” at the size of at least two of me. The dive was over way too soon. As we headed up, I was grinning from ear and my mask kept filling up because of it. Noah’s was as well but I think he was laughing more at me. Up on the deck I couldn’t stop grinning like a loon for at least an hour! I can’t wait for my next experience!
~Tiare, Deckhand

Guadalupe Island season is truly a magical time. The ship is vibrant and guests are grinning ear to ear. I have been diving 38 years and today was one of my best ever!
When you couple together the Big female and curious...

San Benitos Island – A perfect mix of tropical and temperate diving?? The seal grabbed my fin in it’s mouth!!!
On my break today I slipped into my wetsuit and clambered aboard the dive skiff ...