Our favourite great whites have returned to Guadalupe Island and the shark diving is HOT!! The largest aggregation of whale sharks on the west coast of the Americas are gathering in Bahia de Los Angeles. Mobula ray and orca season off Cabo San Lucas is winding down. And Discovery Channel Shark Week is just around the corner…(see our note about Discovery Channel down below!)

The facts! We have been out at Guadalupe since early July and the shark diving has been great. We had 7 individual great whites including 4 juvenile animals on our first day of the season. Visibility has been averaging 100 feet plus. The weather and the crossings have been very nice.

We thought day two was our best day, then day three happened. The second we were in the water, we had great whites circling our cages. As soon as one great white left your field of vision, there would be another one to take its place. I can say with confidence we were in front of the great white sharks for 14 hours in three days. Many times, we had two, three, four, even five of them. Your adrenaline pumps all day long. The second they grab their bait and bang into your cage, it brings another sense of reality to this trip of a lifetime!

Take advantage of us on a peak season Christmas voyage to Cabo Pulmo and the Sea of Cortez. 12 guests max.

Mega Adventure: 13 day / 12 night yacht cruise from north to south in the Sea of Cortez.

To quote Discovery Channel: “Over 100 miles off the coast of Baja, Calif., Guadalupe Island is a notorious hot spot for great white sharks. Here to target the abundant seal population, great whites are silent hunters, stalking their prey and killing with a surprise attack. But the waters surrounding Guadalupe Island are crystal clear. So how do they do it? At other white shark hot spots around the world there is always a kill zone – a place where more predation events occur. But here in Guadalupe, an attack has never been witnessed.”

Hmm. How to say this politely?? BALONEY!! C’mon Discovery Channel. The great whites of Guadalupe Island are about mating behaviour. The reason that very few attacks have been witnessed is because that behaviour is not happening!!

We avidly study every paper we can find on great white sharks (carcharodon carcharias). We believe that Guadalupe is where white sharks come to mate. We know that the gestation period for reproductively successful females is 19 months. We are convinced that the core nursery for neonates (the super cute little guys with a birth length of 4 – 5 feet) is Laguna Ojo de Liebre at Cedros Island which is several hundred miles away from Guadalupe. We know that neonates aggregate in the shallows coastal waters off Cedros in late spring and early summer. We know from satellite tags that the female great whites are in that area in the late spring, pupping baby great whites, and then cruising around for a couple of months before showing up at Guadalupe in September and October.

Contemporary scientific thinking is that the male white sharks aggregate at Guadalupe in June and jostle for dominance in July and August before the females show up. We know from satellite tagging that the sharks start heading back out to sea and SOFA in late November (SOFA is the shared offshore foraging area halfway to Hawaii that the great whites share with squid, whales and other pelagics attracted by plentiful food sources). Predation events are virtually unheard of until after the females head out to sea. We know from our many years visiting Guadalupe that large aggregation of pinnipeds are in April and May when very few sharks are around. We have been on the beach at Guadalupe Island in May literally tripping over hundreds and hundreds of elephant seals stacked up like cordwood with feral cats sunning themselves on top of the seals!! Short answer: sharks come to Guadalupe to mate, not to prey on the seal population.

Captain Mike and your friends at Nautilus Dive Adventures.

The End of Our Best Guadalupe Island Great White Shark Diving Season Ever!
We have now identified over 300 individual white sharks in the ba... 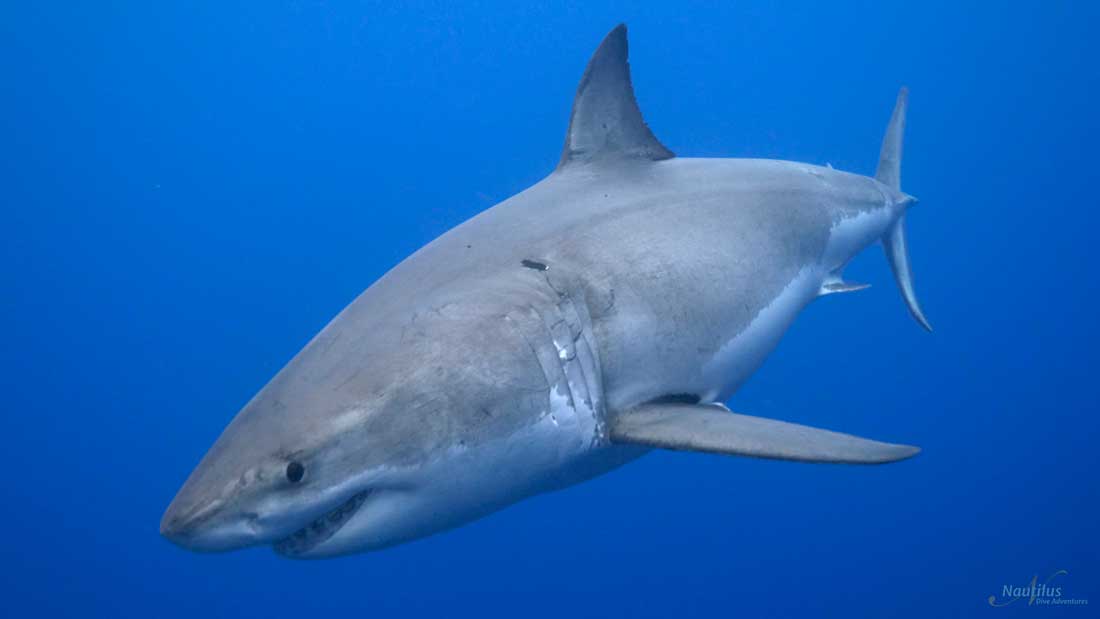