Just imagine looking into the eyes of the world’s most charismatic shark swimming by only a few meters away from you. What an exhilarating experience. But what if you could encounter this iconic predator in the wild and at the same time support conservation efforts to safeguard this vulnerable species and its threatened habitat? Now that’s a fulfilling experience that will change your relationship with the Ocean forever.

In the first installment of this two-part Shark Week series, we would like to share some of our knowledge about the Great White shark population of Guadalupe. Part two will look at conservation and why committing to ecotourism is a critical pillar to protect sharks.

Even though the Great White Shark (Carcharodon carcharias) is one of the most famous marine predators on Earth, little is known about its biology and behavior. As a highly migratory species, the abundance of Great Whites varies seasonally and geographically – especially in the waters of California and Mexico. However, recent technology advances and an increased understanding of aggregation patterns have revealed new insights into Great Whites and key migration hotspots – one being Mexico’s Guadalupe Island.

As one of the most important Great White aggregation and monitoring sites in the eastern Pacific, scientists, conservationists and shark divers come to Guadalupe Island to learn more about this fascinating species.

Situated in the Pacific, 240km off Mexico’s Baja California peninsula, Guadalupe Island, with its privileged location and its volcanic origins, boasts outstanding beauty, great biological value and an important Great White Shark population with unique characteristics. The island is called the world’s most exciting Great White Shark dive site for many reasons. Not only are the Pacific waters around this volcanic island crystal clear, encountering 2 or 3 Great Whites on a single dive is quite common.

The largest predatory fish on earth, White sharks are thought to live up to 70 years, growing to an average of 350cm for adult males and 480cm for females. As White Sharks are opportunistic predators and scavengers, they mainly feed on small fish, skates, rays and other sharks, as well as on different species of seal and large marine mammal carcasses. In Guadalupe, from summer onwards, the sharks tend to forage along the seabed searching for lobsters and various fish. Despite the presence of many pinniped species such as California fur seals, California sea lions and northern elephant seals, predations on these animals are rarer in Guadalupe and can only be seen around December and January.

Researchers believe the sharks primarily congregate around the Island to mate and feed. Whilst males arrive at Guadalupe as early as June, with their numbers peaking in July when they can be seen jostling for dominance, females start to appear in August. Females seem to coincide their visit with the arrival of the massive Californian elephant seals. Mature females can often be seen with swollen bellies and fresh bite marks from mating. With a gestation period of 19 months, female White sharks are thought to pup around Baja California. But some scientists believe that some females also might pup around the island in spring.

Peak abundance at the site occurs between July and December when mating behavior can be observed. Beyond December, the female pregnant sharks start to leave Guadalupe and by February, overall white shark numbers are minimal (except for 3 or 4 resident males present all year round)

Just like White shark populations in other parts of the world, the Great Whites of Guadalupe are highly migratory, and it is believed that the sharks leave the island after the winter months and migrate to vast areas in the Pacific, up and down the Californian coastline and into the sea of Cortez. Direct observations of some individuals have revealed that they travel long-range, near-identical, west-southward directed migration paths away from Guadalupe and towards an offshore pelagic habitat, sometimes traveling as far west as the Hawaiian Islands for a few years in a row.

The pelagic region where White Sharks from Guadalupe tend to swim corresponds with that of reported tagged sharks off central California. It is for this reason that researchers have named the pelagic area in the central northeast Pacific the Shared Offshore Foraging Area (SOFA). It is believed that the sharks compete with whales and other predators for the rich marine life that is found in this region. These observations demonstrate route fidelity movements across millions of square kilometers of open ocean for many years in a row with an incredible spatial accuracy. Many male individuals have been recorded to return every year, while mature female sharks seem to follow a 2-year migratory pattern instead which consists of an offshore gestation period, a pupping phase along the Mexican coast, a pre-aggregation phase and the Guadalupe Island Aggregation.

With this in mind, it’s easy to see why Guadalupe Island is such an important site for Great White Shark conservation measures. Scientists and conservationists are continuing to learn more about the species. For example, skin biopsies for genetic analysis, ultrasonic tags and photographs help us identify each individual shark and gain valuable insights into exact population numbers and trends, which in turn will further inform conservation requirements.

To join Nautilus Liveaboards and our shark experts on their mission to document and protect these jaw-dropping giants, visit us at guadalupegreatwhitesharks.com

It’s Time To Go Diving!
Our favourite great whites have returned to Guadalupe Island and the shark diving is HOT!! The lar... 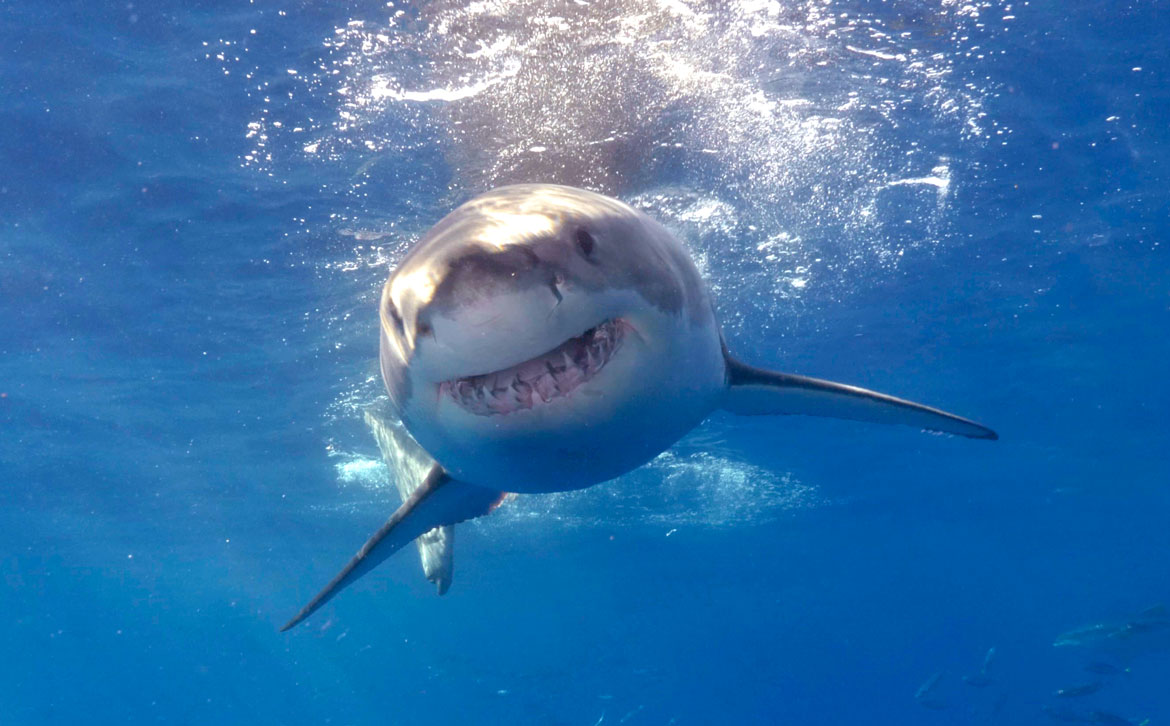 Martin Graf’s first 2019 great white shark expedition
What a start to the season! Andy and Luca Arnone were the first 2 sharks that showed up, with Luca s... 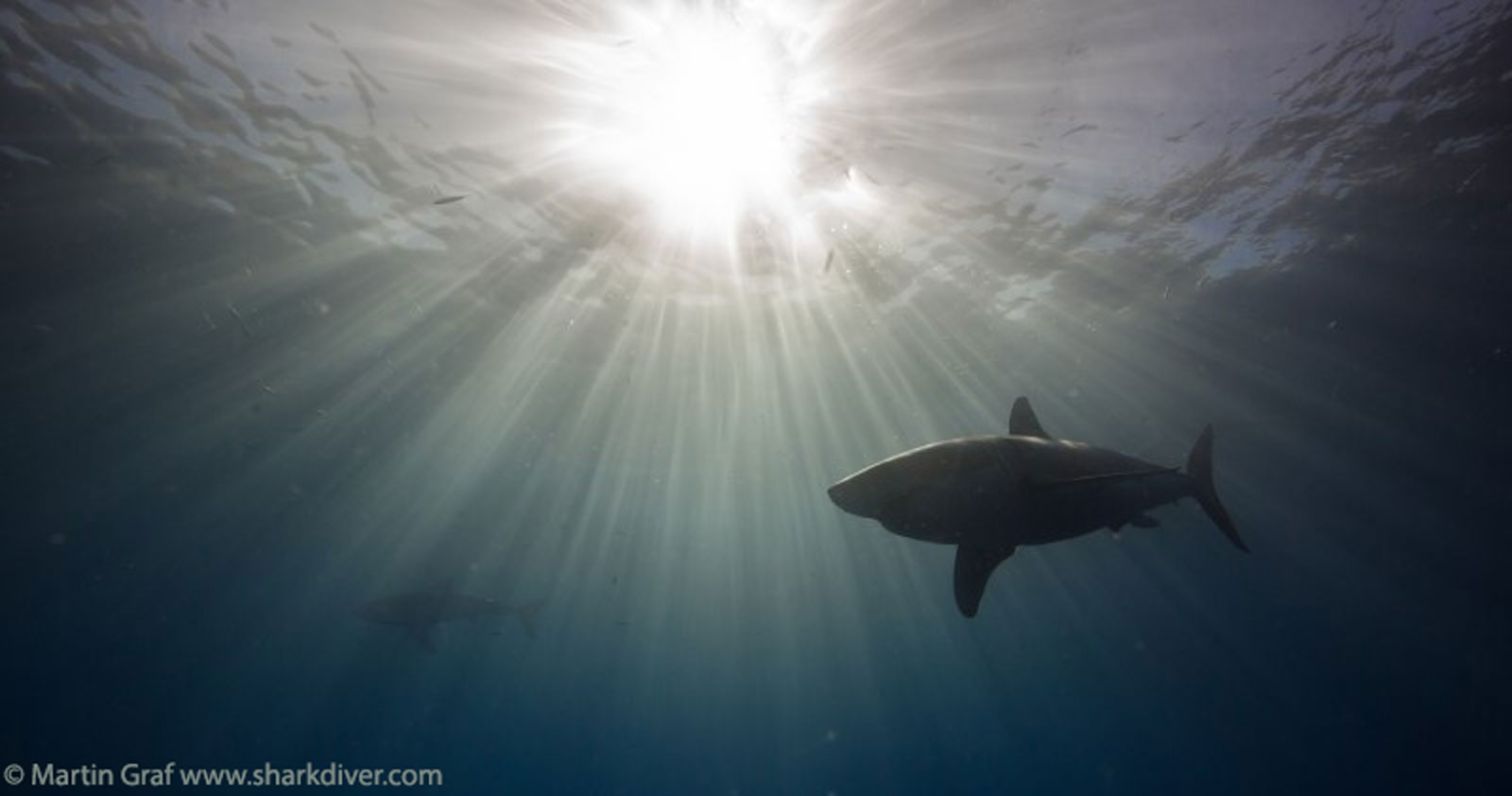