This morning we were escorted toward San Benedicto Island by a huge pod of leaping Bottlenose Dolphins. Some of the jumps were easily 15 feet into the air. The Captain said he was looking one in the eye as he stood on the bridge. The beautiful Baja sunrise lit up the impressive volcanic island as we arrived at the Canyon. All the divers were super excited as we dropped the anchor and set the lines. Just under the boat, we dropped onto a nice pinnacle that lies just off the ridge that makes up the canyon wall. We found several White Tip Reef Sharks lounging on the bottom under a ledge. A few divers went out to the cleaning stations and were able to see one of the famous Hammer Head Sharks come in to check out the reef. The viz down toward the bottom was not a good as in the shallows, so the shark had to get quite close for a good look. 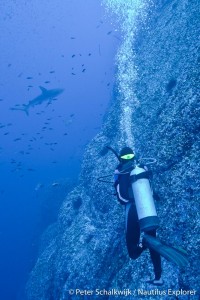 Later in the day, we moved the boat around the corner to the Boiler. Today, the Boiler was not boiling which made for nice calm conditions on the surface and underwater. Here we also found several White Tip Sharks, they were even on top of the sea mount. I saw something new today on top of the boiler: the Barber fish were cleaning the long Needle fish. The long fish would come in close to the cleaning station and open their jaws wide. The cleaners would then pick at the sharp little teeth and clean inside the mouth of the Needle fish. Some of them were rather large, 3 feet  long.
Even though we did not see the Giant Manta today at the Boiler, it was still an afternoon of great diving.
Now we are off to Roca Partida to dive the spire in the middle of the ocean. Tonight, like last night, the seas are calm and the ride is very smooth. We will all sleep well tonight.
Surface Conditions: Sunny, warm, light breeze, 85 F, calm sea.
Underwater Conditions: Viz. 30-80′ site dependent, current mild, water temp.
78F.
Divemaster
Jessie “Sharkchick” Harper

I Have Accumulated more than 10,000 Dives in 35 Years of Diving and I’ve Been a Dive Guide on the Nautilus Explorer since 2004. Crew blog. 06 DEC 2010.
I hope you enjoy this video of a giant manta swimming and interac...

The Dive I Missed was the one where Everyone Saw Mantas, Sharks, Hammerheads. At Least I Saw a Whale on the Surface Swimming Around. Guest and Divemaster Blog. 09 DEC 2010
Diver Pauly from Chicago.  This is my second trip aboard the Nautilus Explorer....