I haven’t blogged for a couple days now and there’s a good reason for it in case you’re wondering.  The weather has been EPIC and I didn’t want to jinx the expedition!  But after today and yesterday I simply couldn’t resist telling you all about it anymore.  This trip has been blessed with such a great weather pattern its almost like Mother Nature is onboard!   One of our “secret dive sites”  that only ourselves and the crew of the Solmar knows about provides as much excitement out of the water as in the water. It was flat calm for almost 2 days which made for the easiest of skiff embarkations.  This is great because it lets the divers concentrate on whats below the surface. 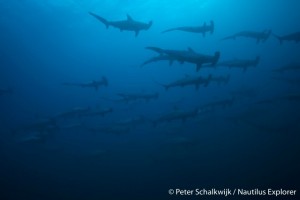 What’s below the surface?  Schools of sharks!  Silkies, hammerheads, a large Galapogos, Silvertips and yes, finally, a 7 meter whale shark!  It came gliding by the group in deeper water and slowly made its way up.  It moved so effortlessly through the water and looked so elegant.  Everyone was struggling to keep up, focus their cameras and just watch as the beautiful shark swam closer and closer.  There was some exciting action as the Galapagos Shark came near and the Whale Shark quickly reacted.  Who thought something that big could move so fast!  It was mesmerizing.  I almost forget about the mantas, the numerous moray eels, the thousands of tropical fish busy swimming around.  Socorro is certainly alive this time, and left us all buzzing from the action.
Captain Kevin 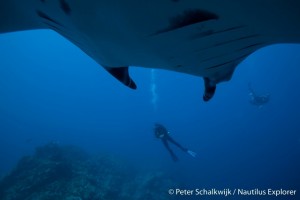 Yesterday at one of our secret dive sites we hit the jackpot!!! Six species of sharks on one dive: White Tip Reef Shark, Scalloped Hammerhead, Galapagoes Shark, Silky Shark, Silver Tip Shark, and Whale Shark. Good luck to the new guys bringing their boats in this spring.   We’re not telling where the best diving is!!    It was the last dive of the day and everyone had all but given up hope on the illusive Whale Shark being sighted on this trip. Just as we fell back into the water and were descending down toward the cleaning station on the southern tip of the rock, I looked down toward the deep. Just below us in around 90` of water, there were the unmistakable spotted patterns of Mr. Whale Shark. I screamed through my regulator and everyone looked around to see what all the commotion was about. We all dove down to catch up with the massive animal. It was a bit deep for us to stay very long and the current that was running around the corner made our time seem all the more precious. The whale shark swam north for a while, then as if on cue and right in front of the cameras, it made a 180 degree turn and swam back south toward the group. We were able to keep up with it for a little while, then using it’s massive tail, kicked up stream into the current and left all of us air breathers behind and out of breath. All day, we had been seeing lots of sharks. Hammerhead schools, hunting Silvertips, and a couple of really BIG Galapagoes Sharks that were easily 7` long and very healthy fat. The funny part of the story starts when we were on the inflatable making jokes about not coming up from our dive until we saw a Whale Shark… fortunately for us, there was one.
This morning we headed straight to another of our favourite Socorro dive sites.   A few people wanted to check out the small window cave in the lava flow that creates the small bay, so we put the zodiacs in the water and toured close to shore. It was an impressive view to look up along the volcanic cliffs. The diving today was up and down. The first divers in the water were given a great surprise. Just as they headed down the descent line, a large school of Hammerheads moved in close to the reef. All the divers got in close to the rocks as not to scare them away. Then, one larger shark broke away from the school to take a closer look at the people. It swam right over my dive buddy’s head. What a lucky time to be in the water. 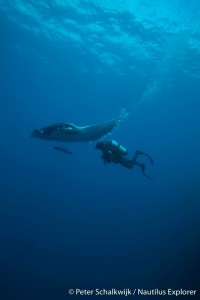 Later in the day, we had a smaller Manta Ray come in to `play` with the divers. It made a few nice close passes and posed for the cameras. A few lucky divers even saw two pods of Bottlenose dolphin swim past the reef. They did not stay as it seemed they had an appointment on the other side of the bay. It was great to see such beautiful creatures pass by so close. The action in the afternoon seemed to slow way down all along the reef, although the Convict Tangs and the Steel Pompono were putting on a show as they gathered to spawn in the low light of the evening.
Surface Conditions: Partly Cloudy, Breezy, Warm, 75F, Light Swell.
Underwater Conditions: Current mild to moderate, Viz. 60-80`, Surge mild, Temp. 76F. 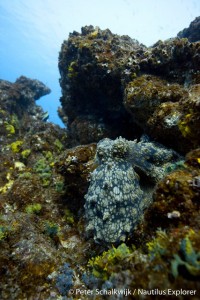 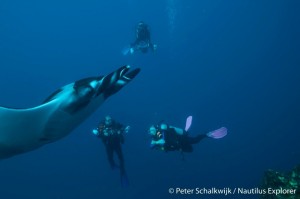 The crew on the Nautilus Explorer are exceptionally accommodating!!  As a spoiled diver I stated that, “I refuse to leave the water on the next dive unless I would see a whale shark.”  I am not sure how or who she made arrangements, but there was a whale shark on the next dive, deliver as requested.  The diving has been excellent and the crew has been great.  We were just here in May and six months later we are back and having a great time.  Come and dive with the nautilus explorer and you are going to have some of the best encounters in diving.

1 reply on “EPIC Weather and Six Species of Sharks on one Dive – Captain, Divemaster and Guest Blog – Socorro Island – 18 DEC 2010”

There were definetely somethings missing to make my trip perfect…
Whale sharks…one of them. I got to see them in La Paz though, it was magic…even babies…all you need is one…but I counted around 18!!!