Today at (*name of secret dive site at Socorro Island deleted by Captain Mike!), during my 200th dive,I finally saw my first whale shark! What a sight! and I also saw something very unusual: as I was swimming towards the whale shark after seeing it cruising below me, a large galapagos shark boosted into view and dashed to the whale shark from below and behind!  For one second, I thought I was witnessing an attack, but no, at the last moment, the galapagos rolled upside down and rubbed its belly against the flank and belly of the whale shark! and the whale shark didn’t liked this AT ALL! : He rolled on his side to expose his back to the galapagos and aggressively drove him away with an almighty strike of his huge tail, dashed away and then turned back to pass right next to me before to move away out of my view. that was one of the craziest thing I ever saw in my life! I knew lots of fish usually rub themselves against the rough skin of sharks to remove their parasites , but I’d never thought sharks would do it to other sharks too! and guess what, I filmed all of it!
But otherwise, even the regular diving  is mindblowing: every dive , we would spot schools of travellies , dozens of sharks and walls covered in morays, lobsters and whitetip reef sharks. I also saw a manta ray, dolphins and a school of hammerheads here, all of that only in 2 days! My first dive here, I spotted 6 different species of shark (hammerhead, whitetip reef, silvertip, silky, galapagos and dusky) and finished with some dolphins and a silky shark playing together with the group at the safety stop. One time also, I was swimming in the blue in the middle of a school of creolefish, when they all retreated to the wall in the blink of an eye, leaving me feeling suddenly very isolated and vulnerable alone in the middle of the blue, and two seconds later, the responsible of the panic broke in: a huge, 5ft+ yellowfin tuna the size of a motorbike emerged from below at terrifying speed, dashed right past me and stormed through the creolefish school above like a silver lightening, elegantly turned away right under the surface and dashed away as fast as he arrived, it all happened in about 4 seconds and litteraly blowed me away, leaving me alone in the blue, like thunderstruck: with my heart pounding like a drum, not quiet sure yet of what just had happened to me.
All the other divesites are fantastic too: the manta rays were here on almost every dive and are incredibly sociable and playful, they are like sea lions!:They come right up on you and dance around with every diver in the group, and looks you right into your eyes -mantas have blue eyes in case you wonder- ! and some of them are well about 20 ft across, they makes the dives looks like an airshow of states-of-the-art stealth bombers, only much more graceful.
Topside too the show is here: the Socorro Islands are wild and magnifiscent, the ship is perfect, the crew is perfect and all the other guests were nice as usual on the Nautilus! Special thanks to divemasters Jessie and Peter from their kindness and knowledge.
It will be hard to get back to normal life after this, but I will be back as soon a I can!
Pierre from Paris

EPIC Weather and Six Species of Sharks on one Dive – Captain, Divemaster and Guest Blog – Socorro Island – 18 DEC 2010
I haven’t blogged for a couple days now and there’s a... 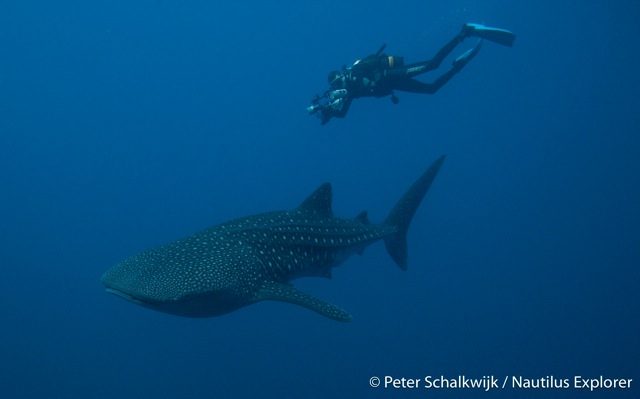 Wow! Wonder if that was an act of submission by the galapagos or just a grooming technique as you describe? Also will this footage be available for public view?
Thanks.

hi john, the footage was supposed to be posted with this blog , otherwise i whould not said i filmed it obviously! (oh ok, i whould have said it anyway just to tease poeples! :-3) i can only assume the nautilus staff forgot to send the file along with my text!
i just posted the video on youtube if you want to see it , but the quality is a bit low as a result; i send an e-mail to the nautilus about it so the video should be here with the text in a few days normally.
the video on youtube:
http://www.youtube.com/watch?v=F21WC2w1SZk