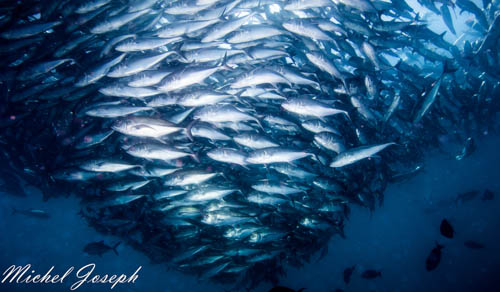 I saw a coat hanger (plastic) fly off the top deck of the boat at around six thirty a.m. and I sprang into action, grabbed the boat hook and couldn’t quite reach it, when my co-divemaster onboard, Magic Juan extended his hand to mine and reached me over the side of the boat and lowered me down to make the grab but then I couldn’t get up because one hand was on Magic and the other was on the hook!!  Ashley came down (who accidentally dropped it in the first place) and grabbed it and helped me up, three person buddy team!!! We did it!!!!!!! The diving has been good up until today, and then it kicked into high gear. I was with my buddy Jules (Julie, don’t call her Jules because she’s going to kung-fu you) at around fifteen meters and I hear this strong rumbling sound, I couldn’t figure it out, wasn’t a boat for sure, but it was a distinct rumbling and sounded like an earthquake or landslide. I was figuring on avalanche or landslide because we were next to the island and it was inclined so that it was not out of the question (it actually happened to me one time in Italy, working in Sicily, a pumice slide and came down right on us, vis zero, but we made it back to the line because I was doing an advanced navigation course and had all I needed haaa..), so what was it???? You’ll never guess…it was a school of jackfish, each about ten kilos, but a mass of them racing in and around us like wildfire, and the thrusting of their bodies in the water was making this sound. Maybe you have heard a school of fish being chased, it makes this sound, now imagine hundreds of big jacks creating this sound. I was bombarded by not just the sight of it, but the vibrating thunderous sound!!!!
THEN, on the last dive of the day, I was diving with another buddy Jose, and we hit the jackpot, a real money spot, huge amberjacks the size of a st. Bernard, jacks whizzing by again like before (without the thunder though, they were not in chase mode or being chased mode), and THEN an autobon of snappers you know whats the autobon? Yeah, the highway in Europe that has no speed limit. An actual freeway of snappers, never ending, big ones, small ones, all different sizes, but non-stopping. Thinking, they have to run out sooner or later, but they didn’t, filming it on the GoPro, decided, well, we gotta keep on diving and make our way to shallower waters, cant stay at 24 meters forever, and so we said goodbye to the autobon and continued our dive. I told the captain, Gordon, we gotta stay here another two weeks, we gotta extend the trip and accept the consequences because its hot!!!! I got them at least to stay another day here at this spot, at least a couple dives in the morning. Where are we???  Not going to tell ya! You want it, come and get it!!!!
Oh man, also we got some real scuba stallions on board again, from the trip when we had Stan Waterman on board celebrating his birthday, we got Ed Stetson (one of the best guys you can have on board, extraordinary gentleman), and Monty and some other scuba pimps. Big shout out to these boys!!!  Also going to give a shout out to Jo. Jo has been my inspiration for so long, and I guess I am in the doghouse because I don’t have any love letters, but I am shouting out anyways. Inspiration is a funny thing, you got it for so long, that drive, that boost, you know?? Then if you don’t get it, its like, why even go fishing because you don’t have anybody to show the fish to, to feed it to, to share it with. Who are you going to show your GoPro videos to??? To yourself??? Don‚t think so, because that’s boring!! I know someone that would even be so bold as to say that would be boring and stupid, stupid!!! (the second stupid is her calling you stupid after calling the aforementioned action stupid). In conclusion, if you have inspiration and you are not in the doghouse, then appreciate it and keep your butt outta the doghouse!!!! RRRRRR!!!
– Tigre (divemaster)
El tigre me llevo a un sitio spectacular. eran pargos perros y tambien yellowfin tunas. I thought I was going to freeze to death in a three mm suit, but I survived, it was worth the pain!!! Haaaa
– Jose (Mexico city, Chilango)
Hello to all my friends back home. Tigre – best-est divemaster ever, he has been taking me on tour for the past two days. This is my second time on the Nautilus Explorer (the first time was to Socorro) and the Socorro experience was so grand that I had to try the Sea of Cortes. The visibility so far has not been the best, but we had some great dives so far, especially today. Today is Canada Day, so Tigre let me guide the dive and he followed. And then being the gracious girl that I am, I let him guide the next dive! And we raced! The first dive was slow and relaxed (Tigre guided) I compared it to floating around like plankton so when it was my turn, he thought I went so fast I got called speedy gonzalez! Then Tigre tried to show me up on the last dive and teach me a lesson so we went fast again with lots of action in between (jacks schools, snappers, groupers, a colony of guitar fish and even a fishing boat zooming over-top of us). Looking forward to another day tomorrow and what amazing surprises that Tigre will show me from the depths of the seven seas!!!!
– Julie (aka Miss Canada!)