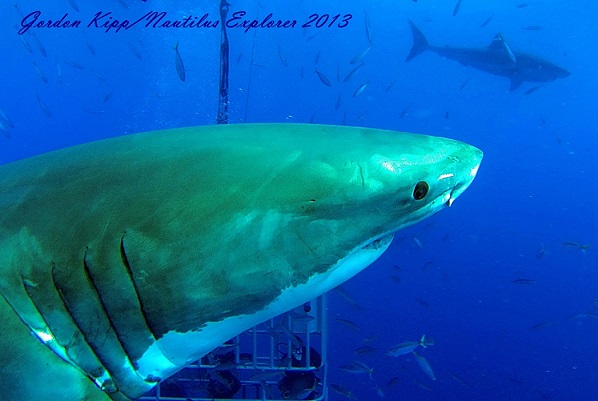 For the first 6 weeks or so of the season we see almost exclusively male white sharks. Generally they are a little smaller in size than the females, especially in girth. When a big female appears in front of the cages they are unmistakable and awe inspiring. Their movements are a little more slow, more deliberate, and you can almost feel the dominance and power in their movements and behavior.
Today I saw my first big female of the season. In length she was about average, maybe 14 ft, however it was her girth and sheer mass that first indicated to me that she was female. Actually my first impression of her was that she was probably pregnant. At the time we had 2 good sized male whities around the cages who had been circling closely until the bigger female showed up. Then suddenly the males seemed to tone it down a notch, slow down a little and keep a little more distance from the cages. A much larger, dominant shark will generally have that effect on other sharks in the area.
Overall today we had at least 5-6 individual sharks, mostly male with the one female. On several dives we had some very exciting encounters, with an individual circling very close, making lots of eye contact and approaching both the top and bottom of the cages. Today was a great way to finish off our cage diving for this trip. We are now underway for Islas San Benitos and Cedros where we’ll be diving in beautiful kelp forests amongst Guadalupe fur seals, sea lions and harbor seals.
– Captain Gordon Kipp
Diving conditions: water temp 20C, viz 100ft plus Surface conditions: mostly sunny, air temp 24-26C

Do not dive Guadalupe Island. The waters are shark infested!
So close, that the tail of the whitey hits onto my strobe! Too cl...

Guest blog : Today we are blessed with great shows from four or five great white sharks in these shark infested waters…
I am back on board from my time off . We arrive at about 5:30 this morning I was...