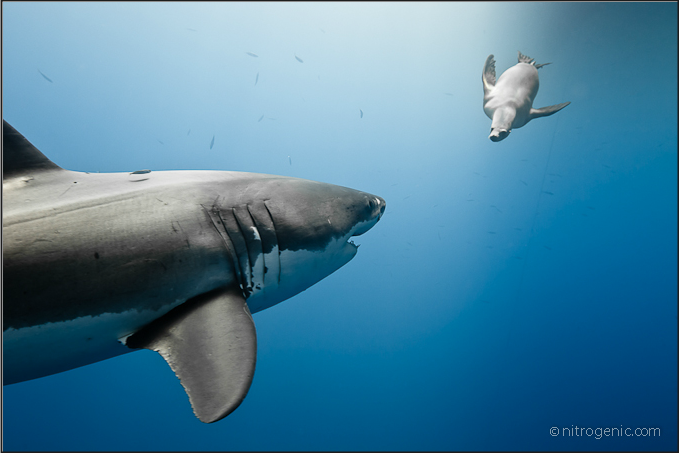 We heading back after a great Guadalupe trip with great white sharks. I got to see Lucy she is a big female that have her tail broken she has been like that since that is three years ago.  Captain Mike tells me that she used to be beautiful and perfect and then one day she chewed on the propellers on the Nautilus Explorer and then took another run and chewed on the hull.  She appeared with a broken caudal fin shortly afterwards. She still looks in great shape and healthy, she just stayed around us for two days. We also had Bruce, one of the biggest male great white sharks in Guadalupe. The scientist in Guadalupe had tagged him and he was at 100-350 meters deep when they had a temp and a depth tag so that’s how they tracked him for 24 hours to get some data.  We also got to see a sea lion just cruising around the great whites, everyone got excited and they were worried that the great white would attack the sea lion. One thing I could say is that the sea lion could move and do a 360 degree turn around the great white and I have seen it before. The temp of the water was around 19 degrees Celsius and the vis was 125 feet plus. Where we dive it is always, like a lake, flat calm and the sun to keep you warm. Anyways I will let you all know what is happening on the next trip.
– Juan The Only One

The great white shark's head rose out of the water with it's enormous mouth opening as if it was roaring at us. Everyone was screaming with excitement!
This past trip to Guadalupe was totally unreal and fun filled! Th...

Another blog from Silvia on station at Lupita (her nickname for Guadalupe Island)
Hola, Again!! One more great trip.. this time with a group of 25 French people. ...