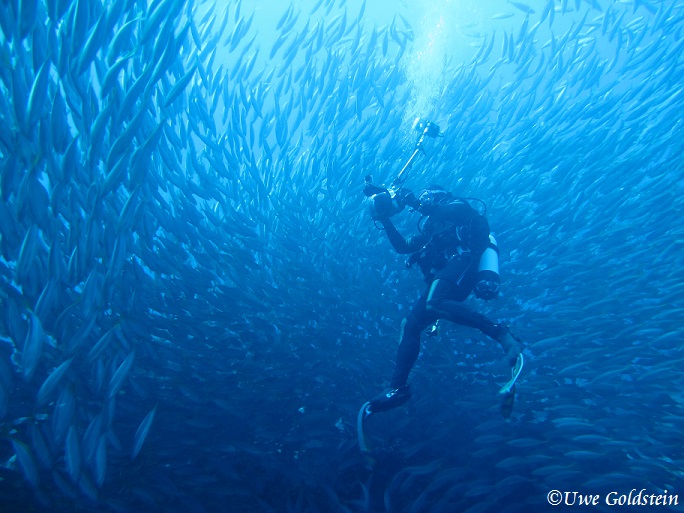 Yesterday we were privledged enough to have good weather to dive Rocas Alijos. For the past 3 years weather has not permitted diving at this spot and the whole crew and all of the guests were very excited to get in the water. The three rocks thrust up from from the water and stood out against the horizon, three stubby fingers in the middle of the open ocean. There is no land for 180 nautical miles from Rocas Alijos so they make quite the sight. Waves crashed from a gentle swell against the rock and we could see three tunnels through the base of the largest rock. Towering up at least 6 stories a tattered Mexican flag flaps in the wind at the top of it where pelicans and gulls perch nonchalontly. From the first dive, came reports of massive schools of fish, turtles, sharks, trigger fish, wrasse and chubs. In between the guest dives, first mate Tavis dropped captain Tim and I off on the site for a quick 30 min dive. We dropped down and the first thing I saw was a green turtle. He was cruising around the reef, surrounded by numerous schools of fish. The visability was crystal clear and I could see small galapagos (or silky I wasn’t quite sure) sharks crusing a few feet above the reef in all directions, not bothering the millions of fish they swam by. In between the huge boulders, blemy fish cleaned rocks and damsel fish defended their territories. I felt as if I was in a massive, very well tended aquarium. 30 minutes was up too soon and after a safety stop Tavis picked us up just in time to help the guests back into the water for their second dive. Awesome dive! I feel so lucky to have had the chance to dive Rocas Alijos!
– Tiare

The hot sun was slowly baking our guests as they lounged around the sun deck, with their tans well underway and many naps under their belts, I roused them to the Idea of swimming in the crystal blue waters of the Pacific ocean, off shore and in over 12,000 feet of water.  Needless to say most of them jumped at this idea, with bathing suits at the ready they lined up and waited for the signal. After the Nautilus Explorer slowed her pace and came to a halt the pool was opened. I can relate this to playing on ice burgs in Alaska as it turns some of the most mature SCUBA divers in the world into silly grinning children.
– Captain Tim

Today on the way south to Roca Partida, Captain Tim stopped the boat long enough for a refreshing swim in 12,800 feet of water. It was quite exhilarating being out so deep and we had a great time splashing around before getting back underway on our way to some spectacular diving to the south!
– Tiare

First mate Tavis and I slipped into the water off Cedros Island to check out hordes of sea lions, Guadalupe fur seals and the elephant seals making such a ruckus on the beach.
After 3 Magical days with the great White sharks it was time to p...

So we stopped in the middle of the Pacific Ocean, turned off the engines and dove into the water for a swim!
The lost ROCK from XDivers Rodrigo Figueiredo on Vimeo.   On our way to Roc...