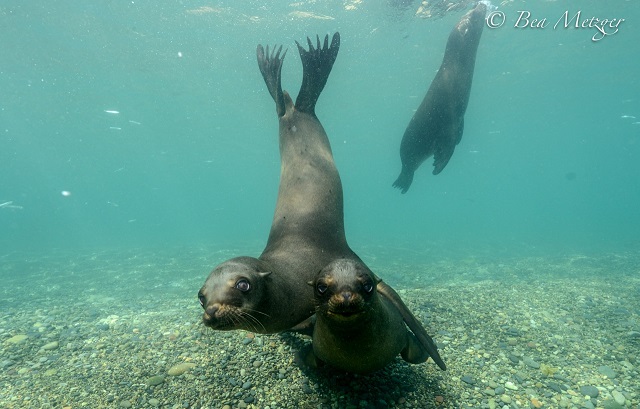 After 3 Magical days with the great White sharks it was time to point the boat towards the waters of Cedros and Benitos I think some of our guests had already started to wonder how this trip could get any better after spending that much time in the water with such huge animals. This morning the sun peeked over the horizon to show a cloudless sky and the Nautilus Explorer anchored just outside the kelp forest of Benitos Island. The 1st group of guests eagerly splashed into the 20 degree water and all we had to do was wait. As the hour mark approached the 1st diver popped up signaled OK with a tap to his head and had a grin from ear to ear, then up came the others, laughing cheering uttering such words as AMAZING, FANTASTIC, BEAUTIFUL !!!   Apparently 30 or so sea lion pups mixed with warm water, good visibility and dense kelp forests can give the biggest Great White sharks of the year a run for their money! We haven’t even started diving at Isla Cedros yet!
– Captain Tim

First mate Tavis and I slipped into the water off the Isla de Cedros during breakfast to check out the hordes of sea lions, seals and elephant seals that were making such a ruckus on the beach. The guests had come up all smiles from their first dive and this was my third visit to this particular spot but I hadn’t had a chance to dive it yet so I was super excited to finally get in the water! We kicked towards the beach with the intention to peruse the entire bay but at the first rock we encountered, a gang of young hooligan sea lions surrounded us. They zipped this way and that, gliding, flying, twisting and turning so fast I couldn’t follow their movements. One moment they were roughhousing each other and the next they were closely inspecting our faces, cameras, fins and tanks. A few of them were grabbing rocks and throwing them around underwater. Others had bits of kelp hold fasts and were chewing them in their mouths and playing tug of war with each other. Tavis picked up one of these marine sticks and dropped it, a sea lion quickly picked it up and zoomed off. It was very close to a game of fetch. The longer we stayed, the more bold they became and the more of them arrived. A few times a huge female buzzed us but it was mostly the babies who wanted to play. We were in only about 15 to 20 feet of water so I swam slowly up to the surface and they followed me craning their necks, pushing and shoving each other for the best view of my be-masked and neoprened head. Too soon it was time to head back to the boat, as we swam away I looked over my shoulder and found about 10 of them were following us, curiously keeping at a distance as if to see what we were doing and where we were going.
– Tiare

So far this is my third season divemastering Guadalupe Island great white shark trips and to me, every season just gets better and better.
We stayed for three days and we saw some huge female great whites...

This summer I dropped guests in the water with ice bergs in Alaska. Today I dropped our guests in the crystal clear waters of the pacific ocean in 12,800 feet of water and 80F.
Yesterday we were privledged enough to have good weather to dive Rocas Alijos. F...