As we talked about in our previous post, the history of Guadalupe Island, Guadalupe is home to many stories, mostly wonderful, but a couple tragic. Recently we came across one of the tragic ones about an accident at Guadalupe from 1973 in which a world-renowned spearfisher died. The full story by Kinga Phillips, “The Spearfishing Prodigy, the Great White Shark and Redemption,” is worth the read and includes a powerful interview with Al Schneppershoff’s son.

The Muhammad Ali of Spearfishing

We often have guests asking why they’re not allowed to dive outside the cage, and beyond Mexican law, stories like this are a powerful lesson in the reality of Mother Ocean and her animals. In the 60s and 70s, Al Schneppershoff Sr was a spearfishing master, winning contests around the world and teaching many who would go on to become famous spearfishers in their own right. While we would rather dive with fish than spear them, spearfishing has its place in the diving world and Al Schneppershoff Jr teaches his students about ocean conservation, never taking more than you can eat, and fishing faster-growing species over slower-growing ones. He learned these lessons from his father, Al Schneppershoff Sr, who was sometimes called the Muhammad Ali of spearfishing. Al Schneppershoff Sr had an undeniable and uncanny connection to the ocean, always knowing where to find the best fish and when to go. However, like every great in every sport ever, he was always pushing himself to do more, catch bigger and find better.

The Accident at Guadalupe

This drive led him and his then nine-year-old son, Al Schneppershoff Jr, to Guadalupe Island in September of 1973 to hunt Bluefin Tuna. Al Schneppershoff Sr, according to his son, “was always the last out of the water,” and on September 9th, it was no different. The rest of the divers had returned to the boat for the day but Al Sr was still out looking for tuna when the great white shark showed up. It’s hard to say whether the great white mistook Al for a meal or for competition, but either way, it bit down on his leg, opening his femoral artery. As soon as the shark realized its mistake (humans, especially humans in wetsuits, are not a very good food source for great whites), it took off into the blue, but the damage was done. Al Schneppershoff Sr surfaced and shouted out “shark!” His son, Al Jr was on the bow of the boat, watching his father dive and immediately alerted the other divers. As they rushed to get to Al Sr, he shouted out what would be his last word, “tourniquet.” Al Sr was alive when he was hauled onto the vessel, but sadly he had already lost too much blood and passed away. Although we can now make the return trip from Guadalupe to Ensenada in 18 hours, in those days it took a long 24 hours for Al Jr and the rest of the divers to get back to San Diego with his father’s body.

Getting Back in the Water

Al Schneppershoff Jr took two and a half years to get back in the water after the accident at Guadalupe, and now, many decades later, is a renowned spearfisher in his own right. He says he holds no animosity towards great whites or sharks in general and plans his dives to avoid areas where sharks may pass through. That being said, Al Jr has never been back to Guadalupe Island.

Other Legends and Stories at Guadalupe Island

Eleven years after this tragic accident at Guadalupe, one of Al Schneppershoff Sr’s friends, Harry Ingram, had a close call with a great white in Guadalupe who was after his catch. Luckily Ingram got out of the great white’s path and was unharmed. Besides these two incidents, there are many other stories of urchin and abalone divers who never surfaced, as well as many other legends we have no way of verifying. Guadalupe Island is a natural habitat for great whites. It is the best place to see great whites in the world because it is a hot spot for them, but there are risks when diving outside the cage at Guadalupe.

Preventing Another Accident at Guadalupe

Every year we learn more and more about these apex predators and we adjust our diving operation and cage design to ensure the safety of not only our guests and crew but also these magnificent animals. Great white sharks are not interested in eating humans, but if you get between them and their food or a trick of the light makes you look like a seal, they might just make a mistake and try and get a taste. It is for this reason that all our divers must keep their arms, legs and cameras inside the cages at all times. It is for the protection of both divers and sharks and goes a long way to prevent another accident at Guadalupe. In past seasons different cage designs and regulations meant that guests were free to sit on top of the cages, however as we dive more with these amazing animals and learn more about them and their behaviour, we have changed the way that we interact with them. We want the experience to be as natural as possible, which is also why we don’t chum or slick the waters with blood. We want the sharks to be calm and curious, not confused and hungry!

We want to thank Al Schneppershoff Jr for sharing this story with Real Clear Life and shedding more light on the history of Guadalupe Island and the behaviour of its toothy residents. Again, we encourage you to read the full story and join us on a Guadalupe Great White Adventure to see how much has changed at Guadalupe and how much we have learned about great white sharks since 1973.

📷 By Craig Dietrich of dietrichunderwater.com

UnderSea Guests Have an Amazing Trip
What an amazing experience! Ever since I was a child I dreamed of diving with great white sharks and...

Ryan’s Day with the Juvenile Sharks
Day two can only be described with one phrase and an exclamatory one at that, “SURFACE ACTION!” ... 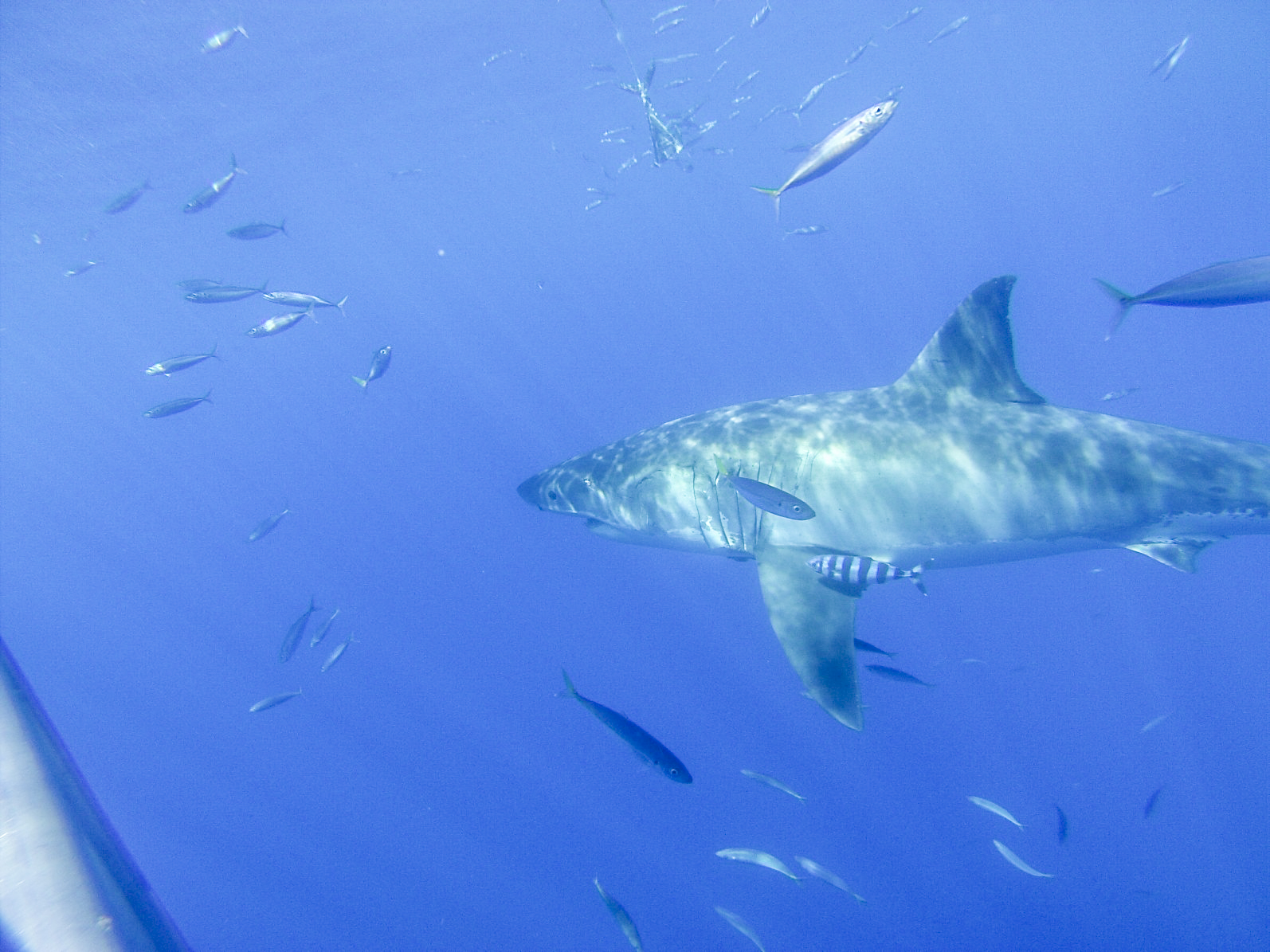