While researchers work hard to crack the code behind the body language and social dynamics of sharks, some specific Great White Sharks naturally stand out from the pack because of their bold and unique personalities. They are easy to recognize, and if you’ve been to Guadalupe Island for cage diving, you have likely heard their names being cheered by fans on the dive platform. Take another look at your pictures on your hard drive- you probably have seen one of these sharks posing for you!

These are the sharks that have made our wranglers sweat, and our guests yell loudest during the 2019 and 2020 seasons. Let’s take a closer look at their personality traits and learn how to identify them:

Her iconic broken caudal fin doesn’t stop her from bursting with full power and breaching the surface with glamour. You will be equally delighted to watch her moving peacefully underwater, and the reason she is so relaxed is that she owns the place. Few sharks dare to challenge her position.

At close to 16 feet in length, Lucy is on the larger of the popular females. The disfigurement on her tail may have been the result of an injury in the early stages of life or even a birthmark. Also known as “Abuela” (Grandma), the scars close to her gills reveal her mating history. She is constantly seen with a huge amount of pilot fish around her, which makes her look even bigger. These opportunistic little fellas seem to enjoy the safety of hanging around with the Queen of Guadalupe (as well as feasting on scraps from her leftovers).

As the most elegant shark on the island, Lucy is extraordinarily bold and has been inspiring divers, conservationists, and filmmakers for years. Like other females, Lucy is usually seen in Guadalupe from mid-September until late November.

Back in 2016, Luca was entangled and deeply injured by a fishing device. Luckily he was set free, and we are now able to watch in real-time the speed at which sharks can recover from their injuries. Luca seems to enjoy the peaceful waters of Guadalupe so much that he is now a resident. We see him year after year throughout the season, but more prominently during the early months of August and September.

Luca is a sub-adult measuring around 12 feet. When on the surface, he moves FAST and makes it hard for us to spare the bait. He makes good use of the early season window as to when bigger sharks arrive he won’t have the same opportunities. We see him challenging similar size sharks and gaining confidence. The exaggerated swim pattern at the surface around the bait shows that he is learning how to display dominance.

To identify Luca, look for the visible scars on both sides of his flank between his gills and pectoral fins. These marks will be visible for the next year or two, but eventually, the scar tissue will become less evident. Sharks are resilient, and Guadalupe Island has become a sanctuary for them, but Luca Arnone reminds us of the threats they face out there due to overfishing.

Kenric is a favourite among photographers because he moves slowly and his spatial awareness skills are outstanding. This means he loves to get as close as he can to the cage without touching it or hurting himself. We like to watch him and think he likes to watch us in return because of his lack of interest in the bait. Everyone falls in love with Kenric’s personality.

Measuring around 14 feet length, Kenric has a few visible features to identify him. Perhaps he thinks he is a dolphin because of a scar in front of his dorsal fin similar to a blowhole. The area around his pelvic fin and torso is also remarkable due to a hook-like figure in the countershading pattern on both sides. Kenric is observed frequently all season long.

Andy seems to be the male version of Lucy, with a characteristic top trimmed caudal fin. At close to 15ft, Andy has reached the size limit for a male. The freckles on his body are referred to as “age spots” and make us wonder how old are the sharks from Guadalupe really are.

With a rather lazy posture, Andy is confident and dominant but doesn’t make much effort to catch the bait at the surface or display any agonistic behaviour towards other sharks. He enjoys swimming close to the surface cages and waiting for the wranglers to get tired or distracted by smaller sharks who move in and out of his territory, taking no risk at all with this gentle giant.

Andy is most often observed during the first months of the season throughout August and September.

Joker was the first juvenile to be tagged in Guadalupe in 2007 and was named after a very touching story. Joker is now a sub-adult reaching about 14 feet. You can identify him by a distinctive white diamond shaped patch on his tail and a deep cut in the middle of his dorsal fin. Joker can be seen all season long from August to November.

While large enough to become a dominant shark, Joker seems to avoid conflicts and enjoy the company of other relatively easy-going sharks. We see him frequently from the submersible cages, swimming peacefully and looking for a convenient angle to do what great white sharks do best- ambush! You would be surprised how sneaky a 14-foot great white shark can be. Using sunlight and current to their favour, some sharks have learned how to win their prize with intelligence rather than speed. The Joker is a living textbook of white shark hunting strategy.

The knowledge we are gaining from tagged juvenile sharks is precious, and we hope to keep seeing Joker in years to come to find the answers to important questions surrounding the life history of the great white shark. Through Photo Identification, you can be part of a growing network of citizen-scientists and even name your own sharks while supporting research!

Some of these sharks will soon be featured on Nat Geo’s Shark Fest! Guadalupe cage diving season starts in a few weeks, so don’t miss the chance to book a trip and meet your favourite sharks face to face!

Do you have a favourite shark? Let us know in the comments, and we will keep you updated when we first see them this season at Nautilus Liveaboards. 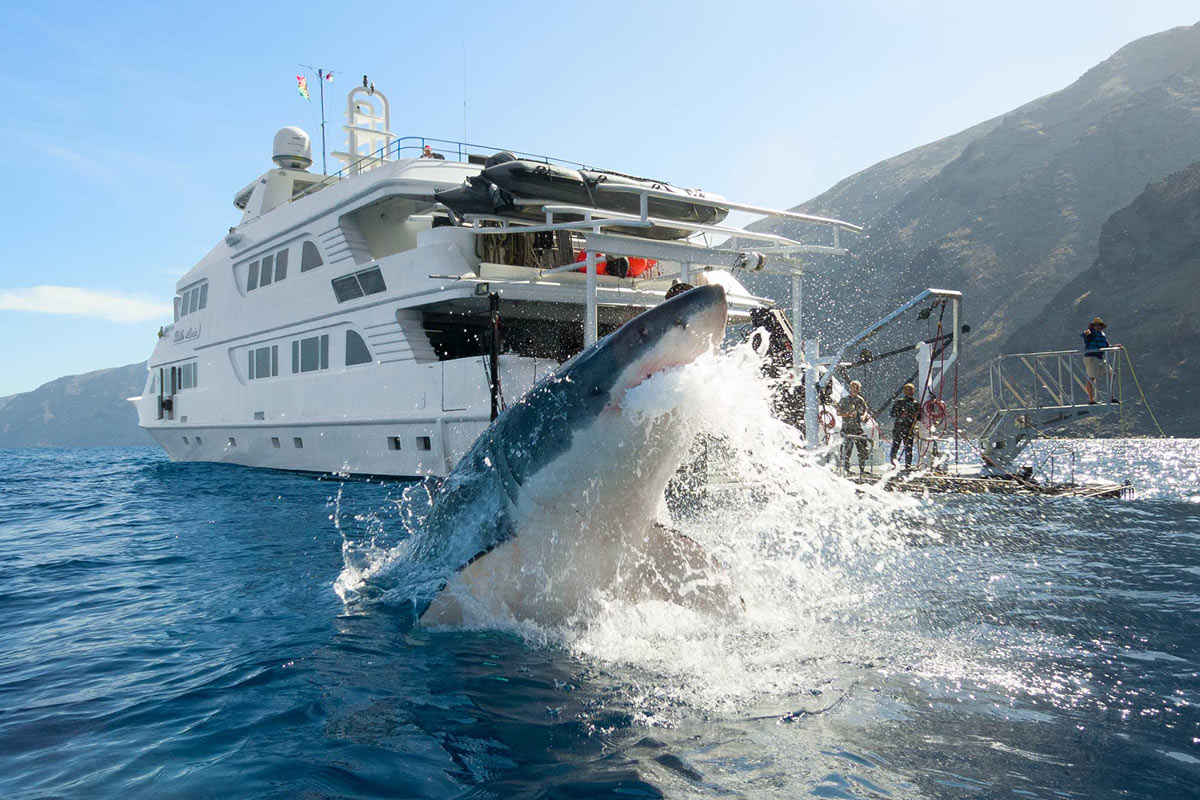 Are great white sharks endangered?
Did you know that a female white shark takes approximately 35 years to reach sexual maturity and a m... 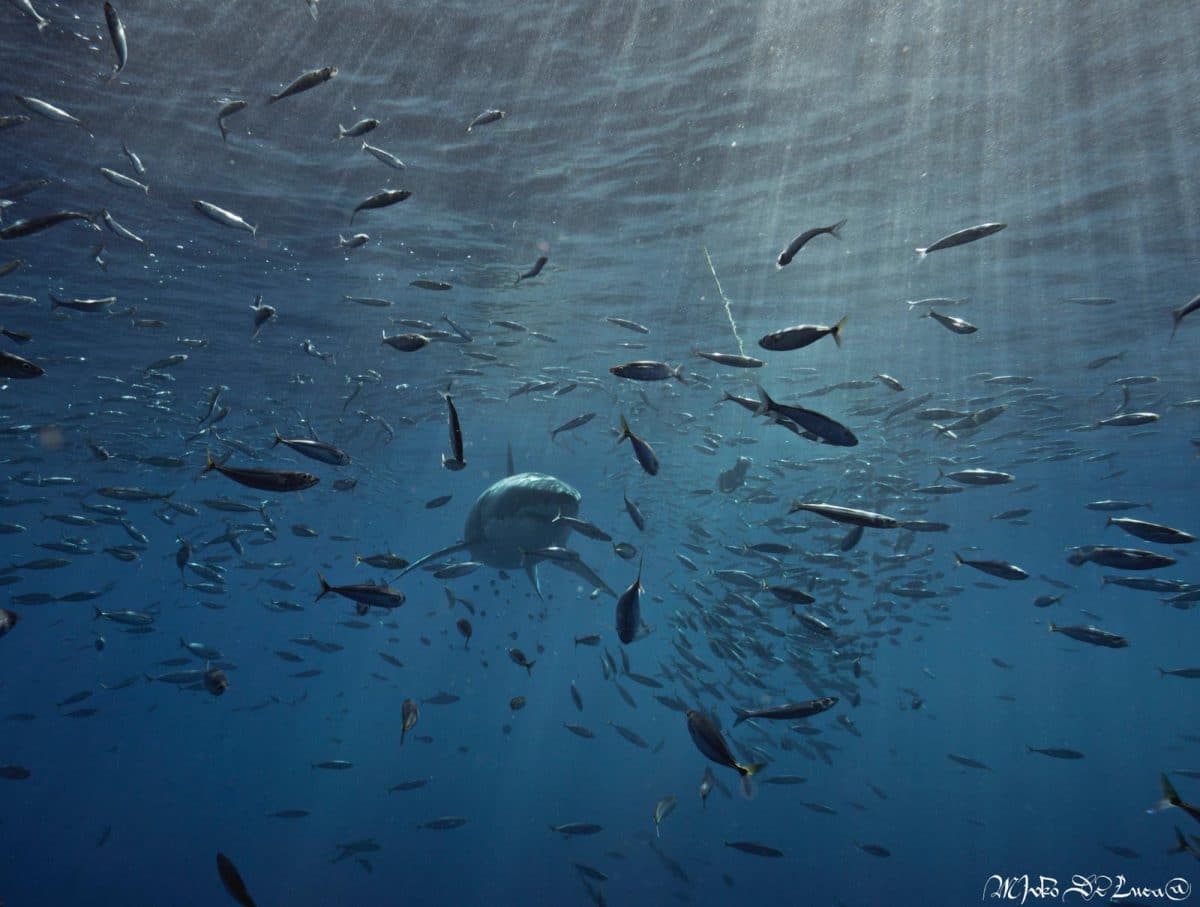