Hello cybernetically-connected landlubbers!
And greetings from Roca Partida. The parted rock is interesting from the moment you hear of it. It’s 65 miles from Socorro and San Benedicto and 265 from ‘civilization’ in Cabo San Lucas. And there’s apparently nothing near it. Well, nothing cartographers would speak of, but unless they dive they’re barely scratching the surface. Other than it being the only visible landmass above water, it’s form – whilst interesting – speaks little to me. It’s function on the other hand… 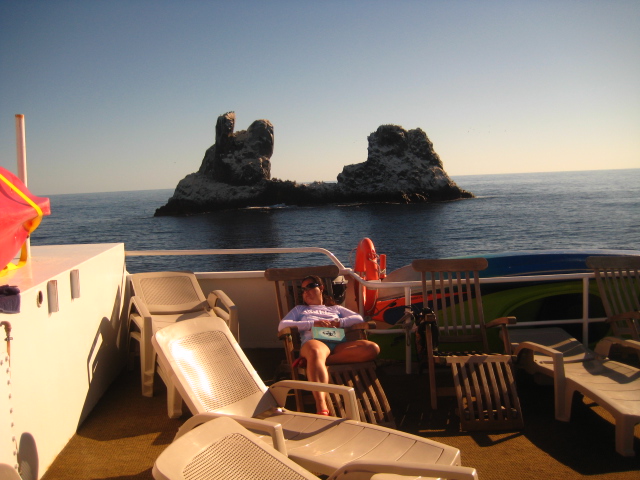 It may well be a 300 ft magnet. It has after all attracted us – and so much more. Its towering gauno-covered tips become pleated walls, harboring moray eels in every available fold as it plunges 10,000 ft into an ever-darkening indigo. And all around it, in heaving current and swell, there’s a sub-aquatic symphony. We plunge in right next to it, immediately informed of the incredible life beneath the surface. White tip reef sharks are so numerous (and innocuous) they’re part of the landscape. Being Nautilus Explorers we’re looking for the big guns and they’re there, often ‘hiding’ behind the schools of inumerable snappers, trumpet fish and wrasse, punctuated by shiny jacks by the dozen and darker, larger trevally with ominous yellow eyes. The schools tower away from the walls and barely shift formation when intrepid divers position themselves among them. Beyond that the shapes move. Sharks – Silvertip and Galapagos – move beneath and beyond the schools, in and out of the blue. They’re not shy exactly, but needn’t bother with we lesser-evolved bubble-blowers. When they become curious, or are hunting they glide through sheets of sardines becoming easily visible and all the more fascinating. We’re fickle, we humans – white tips are virtually ignored, silvertips and the larger Galapagos variety are judged by their varying size and almost immediately forgotten when the most characteristic shape in the underwater world swims into view. Hammerhead! Moving with a seemingly greater intent and energy, its serpentine sway approaches the schools but seldom reveals its detail to the divers. We look for more. We see so much but we don’t forget that particular creature. We negotiate the swell on safety stops, looking up at the white rock above, surfacing to be picked up by our zealous zodiac crew.
And we do this several times a day, in between the on-board banter with now-familiar friends, the relentless pampering by the hardest working crew I have ever seen and watching the humpback whales that have been following a respectful circuit around the rock and our floating home. Spouts are regular and raised backs glisten in the sun; fins slap the water as if to re-iterate their presence and we’re teased by tails that are only shown on occasion.
I do not do the 4th dive on day one at Roca Partida, instead I choose to exhale the process and start afresh the next morning. A coupla cold cervezas consigned to obscurity later and Enrique’s sunset BBQ’d Pollo Diablo with roasted bell peppers bringing spicy smiles to all, we’re informed the Navy are to make a night inspection of our vessel. I have no qualms with this as they are keeping this pristine area protected. Bigger forces are at play. 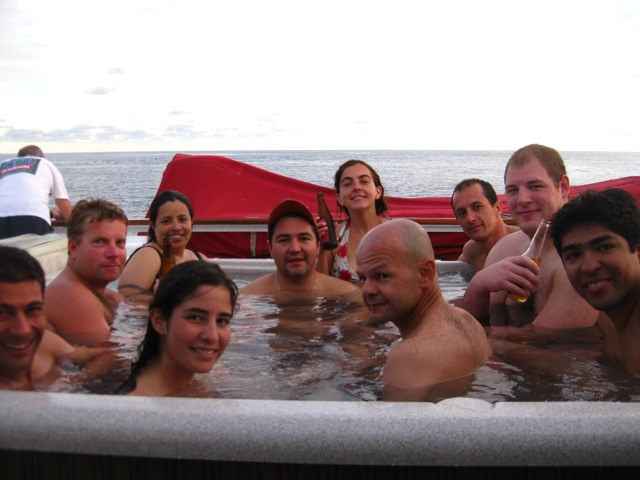 It means we were moved from our dinner table to the foredeck as the uniformed gents board. Refusing to let the mere presence of armed men detract from proceedings, our dessert is brought out to us. Bowls of pastry and cream are handed down the lines of gathered guests whilst Jeroen, our Dutch Divemaster serenades us on guitar with songs of his own making. We chime in for good-natured measure with ‘Yo no soy marinero Yo no soy mariner- soy capitan, soy capi-tan!’ as the military make their way into the night. 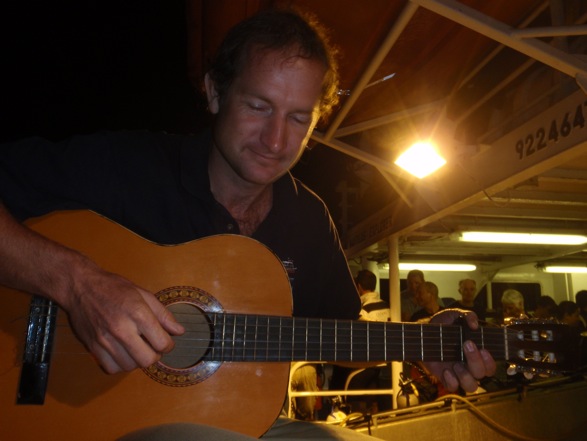 Sleep is dark and silent and  gives way to sunrise over Partida as a luminous pastel masterpiece. It feels like it is going to be a good day, and is.
Falling from the day’s first boat, I’m still inverting myself for a pre-planned descent to 110 ft when my buddy David grunts into his regulator to get my attention. I turn to see him pointing downwards, expecting to see one of the previous day’s delights but, without any warning or pre-arranged program, below us is a whaleshark. Perfect timing for a descent, I hold my nose and kick myself down, not actually expecting to keep up but wanting a closer look at its intricate markings and sublime shape. I get pretty close at 100 ft, but then it moves to 80 and rounds the south corner of the rock and is gone. I turn to see David’s regulator being held in by a huge grin. It’s his first whaleshark. We shake hands as I offer my congratulations and thanks for being so alert. We resign ourselves to our original plan of hunting for hammerheads, all the while hearing the whales calling in the distance. We see a couple of hammerheads, just out of detailed range but unmistakably shaped in the lesser blue. We see silvertips, white tips and above us, once more, apparently doing the rounds of Roca, our juvenile whaleshark. Christine, one of the Explorer’s infatigueable crew, has a morning break  and is gladly descending toward it, her sun-bleached blonde hair unmistakeable with surface light behind her. I fin backwards and exhale as the shark casts a shadow over me. It slows, turns and I am able to gaze at the length of its 18 ft body as it moves above me. Perhaps bubbles are irresistably ticklish? This is afterall a young and playful creature. Christine and I perform an inverted High 5 like circus acrobats. The whaleshark circles Partida the entire length of the 3 phase dive, each of us enjoying a handful of encounters,  exuberant and exhultant exhalations and plentiful photo opportunities. Heavenly. The tide comes in. Partida’s swell above and below makes the rock’s corners impassable but the action that occurs is spectacular when seen from a safely-ensconced crevice. A wall of sardines lifts off just the other side of a rock we’re tucked behind. They’re penetrated by a silvertip of obvious intent a few feet in front of us. A barely determinable hammerhead moves in to a school near the wall at such speed it’s within feet of delighted divers before it realizes it is not alone. It snakes its way upwards, just off the wall’s face, its perpendicularly-positioned eye staring back at us. Whoops!      As we surface from a later dive on day 2 we see the tails of the whales slapping the water we we’re floating in not terribly far away. As masks are removed, the swell liftes us up and we’re blessed by a humpback breaching, the lines on its belly clearly visible as it lifts up in slow motion and crashes back down. As we sit sucking on cold beers in a hot tub at sunset, the full moon rises in between Partida’s towers. Stories tussle for telling and images are recollected by  an over-stimulated but tranquil consciousness as we gently set sail for Socorro – the culmination of our our already amazing adventure. ….
Socorro is…
We interrupt this blog to move to the bow, straddle the prow and watch dolphins frolic in the water just below dangling feet. They show off for 15 minutes, turning over so their white undersides reflect the morning’s glow, looking up. Our hostess Silvia brings me a hot tea so I miss nothing of this incredible communication that is such a privilege to experience. The dolphins leave seconds before sunrise. A glowing golden orb rises directly in front of our slowing boat. Another day beckons.

The Hammerhead Shark must have thought "What a Weird Diver, he is not Interested in me as I Swim Beside Him??" Guest Blogs. Roca Partida January 21, 2011
Roca Partida… In the morning we arrived here… what an...

Best big animal encounters of the trip with a huge school of hammerheads circling in very close to our divers – Captain's Log – 21 JAN 2011
We have just wrapped our last day of diving for this trip to the incomparable So...