Nautilus Explorer continues to assist Charles Darwin Foundation with fascinating study on shark migration.
May11, 2011Puerto Ayora, Galapagos
The Charles Darwin Foundation (CDF), a founding member of the Migramar network of scientists focused on the Eastern Tropical Pacific (ETP), and the Mexico-based research group, Pelagios, have identified a new shark migration record for this oceanic region. 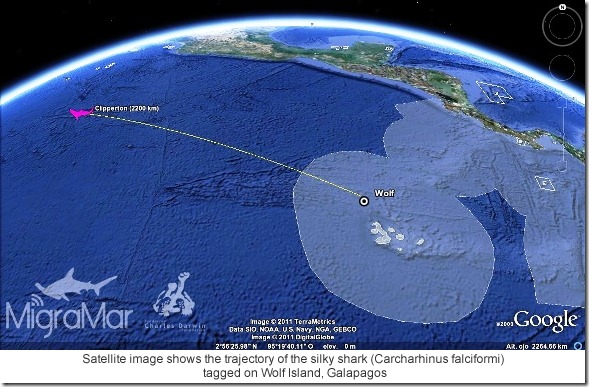 The Nautilus Explorer donated space for scientists to continue their research in the Clipperton area. In April, the Pelagios team found records of a silky shark (Carcharhinus falciformis) in the surrounding waters of Clipperton Island, 2200 km distant from its tagging location at Wolf Island in the Galapagos Marine Reserve (GMR). This charts the current record for shark migration in the Eastern Tropical Pacific monitored by the Migramar network. The crew on board the Nautilus Explorer serviced the underwater receivers and were able to download the data to help in the scientific research being conducted.

The record-setting female silky shark, measuring approximately 1.9 meters in total length, was tagged with an ultrasonic chip in the Wolf Island anchorage in March of 2010.  The shark remained in GMR waters for approximately two months where it was last detected on May 1, 2010.  Since then, its whereabouts remained unknown until its September 18, 2010 detection off Clipperton Island, where it remained for one month. These appearances were recorded via ultrasonic receivers placed by Migramar throughout the ETP.

Ongoing for four years, the shark-tagging project in Galapagos is a joint program of the CDF, the Galapagos National Park (GNP) and the University of California-Davis. It facilitates the capture of biological and ecological data to enhance conservation of ETP pelagic biodiversity.  Among the species currently under investigation are whale sharks (Rhincodon typus), hammerhead sharks (Sphyrna lewini), Galapagos sharks (Carcharhinus galapagensis), silky sharks (Carcharhinus falciformis), and black-tip sharks (Carcharhinus limbatus).

Although this individual is the only one of its species to be tagged thus far, its Clipperton registry supports the theory of a shark migration corridor within the Eastern Tropical Pacific.  The Migramar network has successfully tracked the movements of hammerhead sharks between the Galapagos, Cocos and Malpelo islands in the heart of the ETP, but never before outside this zone.  It is postulated that Clipperton Island serves as a midway resting place for pelagic fish along their migratory routes between the northern and central ETP. Clipperton Island is the only coral atoll in the ETP and is located approximately 1100 km from Tejupan, Michoacan, Mexico.  It is a French possession administered by French Polynesia.

Pelagios conducts a shark-tagging project in Mexico’s Gulf of California and Revillagigedos Islands, as well as Clipperton Island.  Migramar is a scientific network that studies the behavior, site fidelity and migrations of pelagic species such as sharks, rays and sea turtles.

Highlight of the dive day was snorkelling with a pod of pilot whales (false killer whales) of San Benedicto Island. 11 May 2011
So we started up with high expectations at Socorro and getting ou...

Guest blog, and recent images from socorro
How was your day? Two lovely dives today.  Sort of like a walk in a park. Erik. Every th...