Roca Partida has lived up to its hype and then some. The two day stay began with an eventful exploration of the ancient magma plug. Schools of fish including almaco jack pairs, horse-eye jacks and more white-tip sharks than I could count, and of course, the incredible giant mantas. All of this peppered with yellow-tail tuna, silky shark schools and the incredible hammerhead. The moment that I’ll never forget however is the moment our group witnessed two mating white-tips.  As we approached a wall at Roca Partida, we saw a hurricane of white-tips circling vertically. At first we were horrified, thinking one shark was being eaten by another but almost immediately out trepidation turned to excitement as we realized we were witnessing something very rare indeed; white-tips mating!!! So few people witness this event that we felt incredibly lucky. Second only to the rare mating ritual was observing a school of hammerheads swim by! On one of our first Roca Partida dives, our awesome dive master, Frankie, lead us out into the blue where after a few minutes we observed a school of 60-70 hammerheads swim by. All in all this trip was amazing!

The Boiler – Delivers up close and personal Manta encounters!  Each diver surfaced with exclamations of delight as they recounted their intimate experiences with these majestic creatures. I am certain that one of them actually winked at me as it glided by inches from my face. This was by far my best ever Manta encounter!

Socorro Island – “The Octopuses Garden”. Here we spent about 15 minutes entranced by an Octopus as it worked its way over the rocks, groping in cracks for a tasty morsel while a hungry Hog Fish hovered overhead waiting for a stray tentacle to snip off.

Socorro Snarkel – Night snorkel with Silkies. I entered the water with trepidation a high index of suspicion about the size of these sharks. “ They’re just ba-abies”, they said.

Hmmm… I know about the 25% larger rule with masks, but I’m pretty sure some of these guys were at least 6 feet long. It was a little creepy for me, but I survived without so much as a bump in the night.

Roca Partida – A Rock in the Middle of Nowhere: Alive with Galapagos, and Silky Sharks, schooling Hammerheads and mating White Tips – “Oh my!”

The water was clear and the current was minimal. A spectacular site with loads of life!

Hurricane Blanca opened up new opportunities and experiences!
Our diving trip did not take place as planned , blame the hurrica...

Diving since 1979 and just had one of the top dives EVER!
Never, ever give up! So yesterday not só great; lots of current and vis less than 20′ at the ... 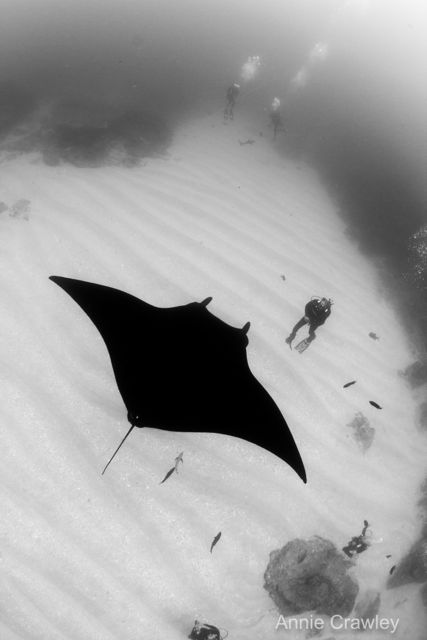