Hello divers! Once again we are coming back from Guadalupe Island with 14 identified sharks. One of the highlights was “Rhett,” who is easy to distinguish due to a little patch on his tail in the shape of a wave. He was giving us close-up looks in the submersible cages the whole week, and “Joker” was driving our guests crazy in a series of breaches and tuna chasing near the surface cages.

The water was colder, which means more sharks of course, and the visibility was a blessing: 130ft plus (one of those weeks when you can see the anchor chain on the bow from the stern going deep, deep).

Just when you think you had it all, as we were sailing back to Ensenada, we were greeted by Orcas!! I even got a selfie with them!

Guests were awesome as always, people from Canada, US, Italy and Argentina, and also Captain Keith from the “Deadliest Catch” on the Discovery Channel!

What a trip!! What an ending!! If it wasn’t enough with all the great diving with the great whites, just a couple of hours before getting to the Port of Ensenada, a pod of Orcas, about 5 total could be seen at the surface, with about 4 females including 2 very young ones. Amazing times, and then when we least expect it… Boom!! Even better!!

As I drop off our guests in San Diego and we say our goodbyes, many tell me they would love to swap places with me and re-board “Shredder,” our Shark Express and head straight back down to Ensenada to sail off on the Nautilus Explorer once again.

Everyones’ mind were blown on this trip and, as they say, expectations were exceeded. On this trip we had less experienced divers as many had just completed their SCUBA certification specifically for this trip. This is great, as not much diving experience is required to be in the cages.

Most people in the group were actually wildlife enthusiasts, with many having done animal watching tours before in Africa, Alaska, Antarctica or other places before. So we had a lot of great animal photographers onboard and collected a lot of great shots of the sharks trying to bite the bait for our weekly slideshow.

Underwater we had great visibility and a lot of sharks once again. The temperature varied between 19˚C and 20˚C. Many sharks we knew from last week like “Ropey,” “Rhett” and “Andy” came by, and we also had many new visitors. Over the days we had a mix of genders and ages, including very small (juvenile) males, and on the last day, two very large females. So, excitingly, the “Big Momma” Season seems to have started!!

We did a full day of surface cage activities today and our guests are totally satisfied. With full participation they all managed to identify 17 different sharks and they were all enthusiastic about today’s activities. Burgers on the sun deck this evening topped the day off and we all looking forward to another awesome day tomorrow. 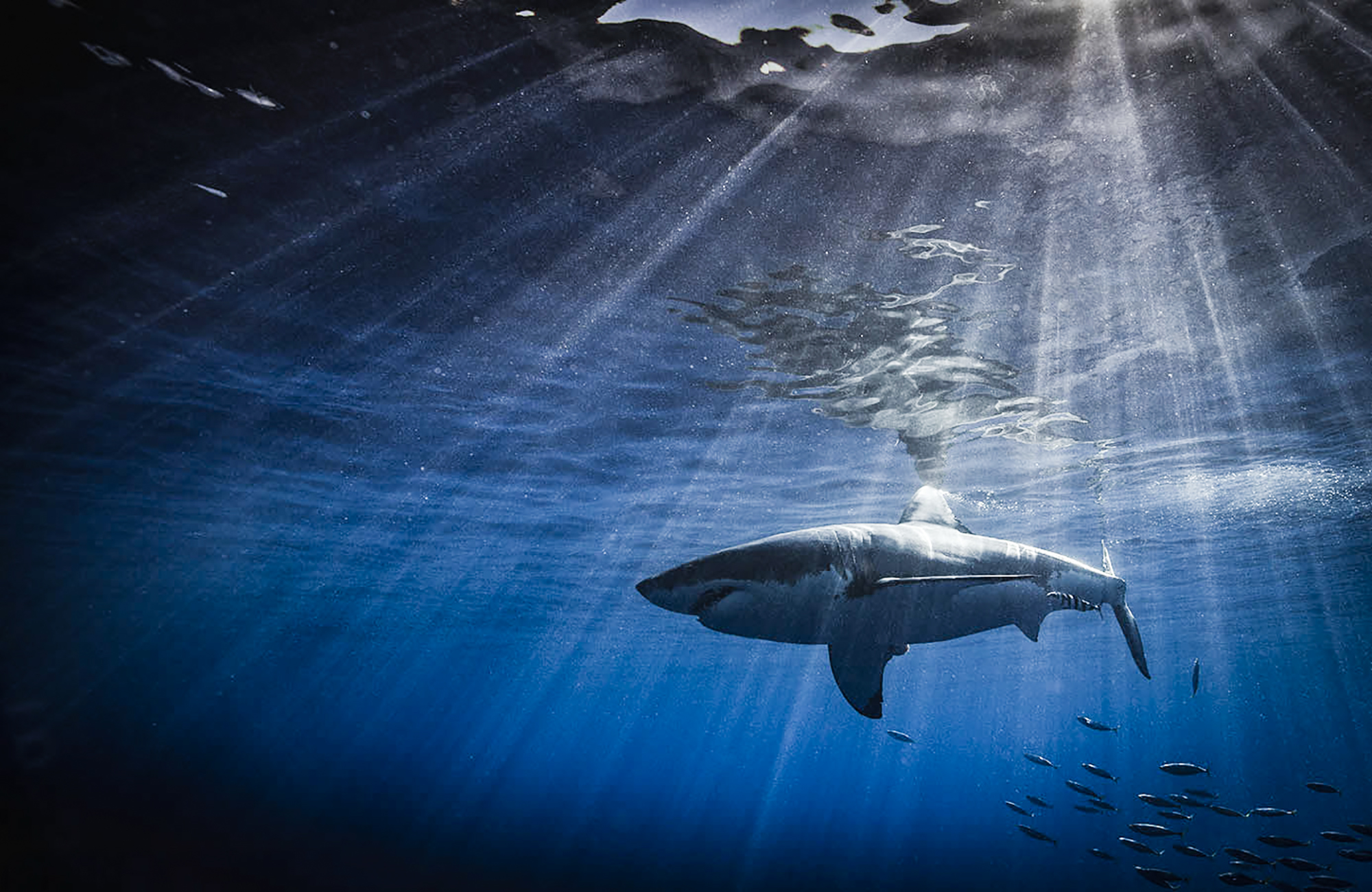 Cheeseman’s Guadalupe Great White Shark Trip
As for the sharks, well, it was really great to see four come out of nowhere on my first dive and an... 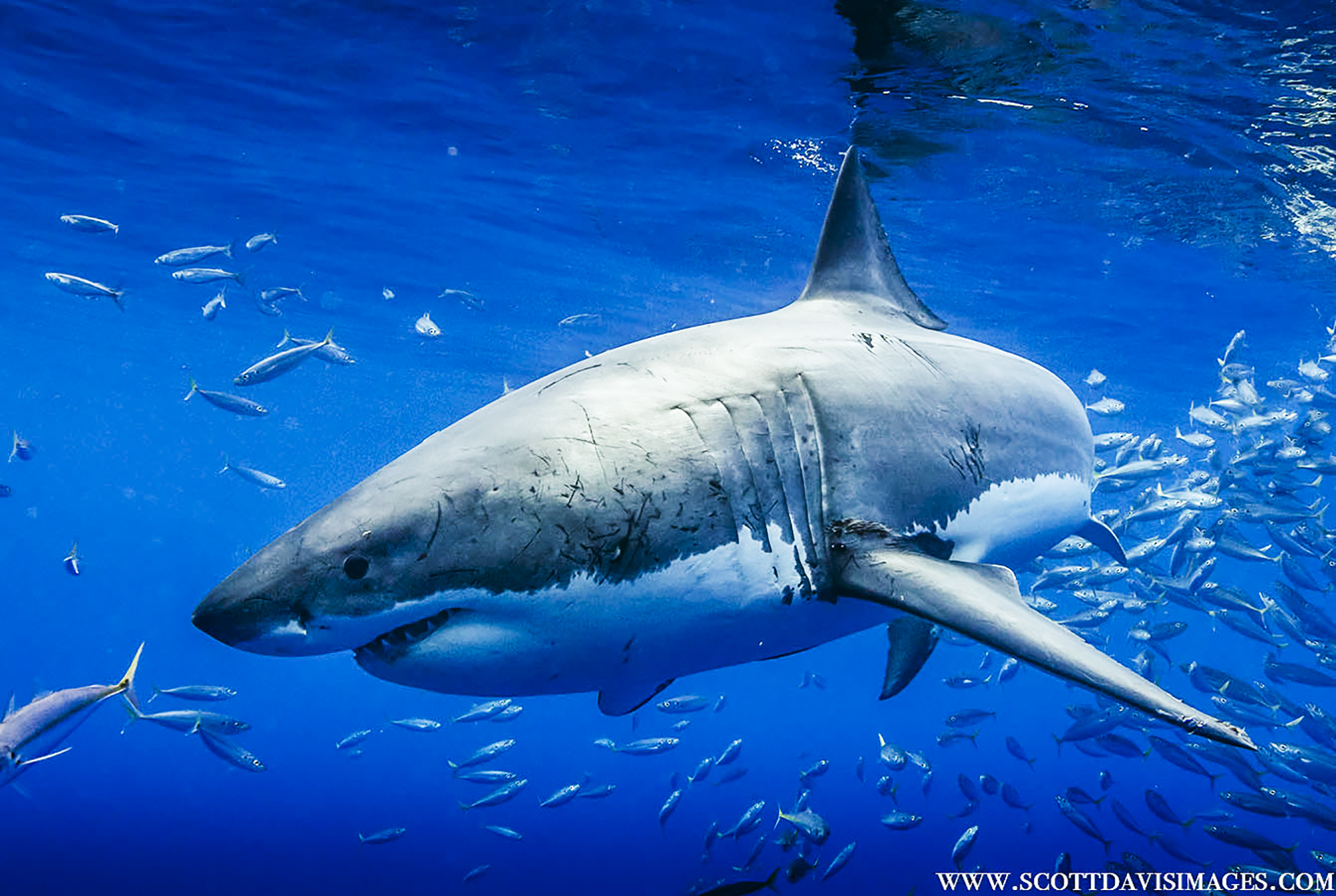