Diving with great white sharks has been on my bucket list for years. My dad has been several times and had said I really need to go. I had attempted to go a couple of times but, it was always unattainable due to everyday life stuff that we tend to let get in the way of the things we really want to do. Last Christmas my gift from my husband was this trip, to Guadalupe Island on a Nautilus ship. And, I would be going with longtime friend, Rick Salas! Rick and I have known each other for almost 40 years when he was a student at Brooks Institute. I was incredible to think I would finally be going on this trip but, I honestly did not know just how incredible it would be.

Finally the time came and after 10 months of anticipation and a full day of travel to get to the ship, we board the Nautilus UnderSea. I was raised near the ocean and have spent a lot of time on our family’s vessel, the “Just Love.” As soon as I stepped foot on the ship, a feeling of comfort came over me. We were welcomed by the crew, Osa and the Captain, Julio, Dive Masters, Rodolfo, Tony and Juan, and Deckhand Geronimo, and were led to our staterooms that were tidy and comfortable.

We arrived at Guadalupe Island in the wee hours of the morning, putting down anchor before daylight. At the crew briefing on the way out, they said the cages would be open by 6:30 am so I woke early, as usual filled my cup with coffee and headed out onto the deck. It was still dark and the crew were cutting up the frozen Tuna with a chainsaw into cubes that would be easier for the wranglers to handle and, presumably into bite size pieces for the sharks.

The sea was calm, the winds were nonexistent. Coming from the shore, the cries and bellows of the Elephant Seals only added to the mystique of this place. As the sun rose, the island took shape. A rough and rugged cove jetting up front the ocean. The morning light turned the cliffs pinkish orange that reflected on the smooth surface of the sea.

As we waited for our time in the cages a wrangler would throw out the fish and drag it back in. Each time, attracting Mackerel that would follow behind. Very soon after the first piece of Tuna was thrown out in the water, the sharks appeared. They were so much larger than I thought they would be but came up from the depths just as I imagined. The sharks circled and came toward the bait but, not taking it. They swam by, just to test it out. Then, all of a sudden one of them ascended quickly and before I knew it, surfaced, mouth wide open, teeth exposed, grabbing the piece of Tuna from the wrangler’s line. It gave me goosebumps and at that moment I realized just how powerful and majestic these creatures are.

Our group was the first to get in the cages. I was in the cage with my friend Richard and my new friend Elizabeth. I have been diving hundreds of times before but, I will admit it was a bit unnerving crawling in to a cage enclosure in shark infested waters. The dive masters were very attentive and made all of us feel comfortable that we were safe and if anything ever did happen they would be there. After I got comfortable with being in the cage and breathing on a regulator again, I looked around at the beauty under the water.

Almost immediately sharks appeared. I marveled in the size of them and the colors and their features. The second dive, I took my camera. I am a photographer’s daughter. I love photography and enjoy photographing nature, landscapes, wildlife and my pets but, I have never taken photos underwater. I am honoured to be using my father’s camera. I found taking pictures of the sharks challenging. They move a lot faster than I ever imagined so tracking them is difficult. In the end, I did get a few shots that I am happy with and worthy of showing off. After an amazing day of diving and watching sharks from the surface we had Taco night on the upper deck. Felipe cooked an amazing meal for all of us. It was delicious.

Day 2 of the trip, not to miss a thing, most of us rise early to catch the sunrise and the first bait to go in the water. It was a quiet morning, cloudy and cool with only a little activity from the sharks on the surface. We may have been a bit spoiled by day one, seeing sharks right away. Underneath was a different story. We did the mid-morning dive and there were three swimming close by. A few of the more notable sharks, made an appearance and the most notable was “Ropey.” She is an incredible animal that, at one time, was being squeezed by a rope that was wrapped around her. On the surface, later that day, we saw 2 breaches and one dolphin! It was an incredible day.

Another great part of this trip has been getting to know the others on the trip. They come from so many varied backgrounds and each have interesting stories to tell. It has been so great to get together after dinners and view each other photos. We all come from different perspectives.

The food on this trip has been an unexpected pleasure. I had expectations of being on the water, in the water, seeing sharks and of course meeting new people but, the food has been exceptional! The menu is amazing with a variety of foods. We certainly did not go hungry! I don’t think the crew ever sleeps! They are so attentive to everyone’s needs, no matter what the request is, they are happy to help.

Day three, we had a beautiful sunrise, the day was sunny and comfortably warm. “Lucy,” seemingly the matriarch of Guadalupe Island, was around all day. What an incredible creature. She swims slowly but methodically through the water until she is ready to strike the bait. All three dives were great, but the third dive was exceptional. “Lucy” and a number of young, assertive males put on quite a show. It truly was a grand finale!

This trip has truly been a life changing experience and I recommend it to ANYONE. From the ship, to the dives, from the amazing crew to the food and the accommodations it will be an unforgettable experience. Nautilus has put together an incredible series of dives and have hired the most highly qualified people to run the trips. I will be back with my family to share the experience.

Pregnant Hungry Sharks at Guadalupe!
I saw today the biggest great white shark I have seen here at Guadalupe Island on board the Nautilus... 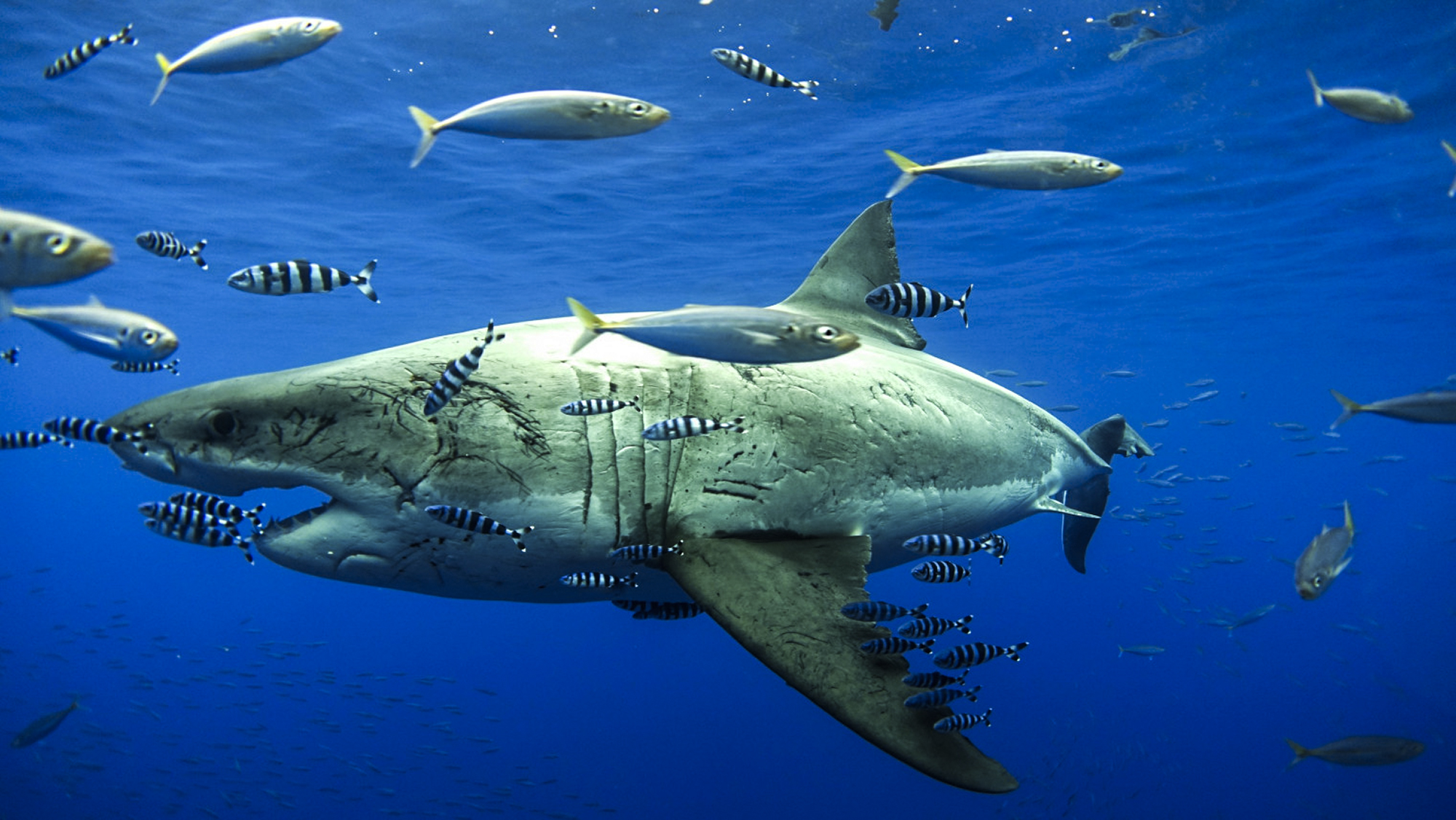 Lucy and Scarboard Impress Divemasters at Guadalupe
An even larger female came and hung around after "Lucy" left. Everyone was amazed by her sheer size ... 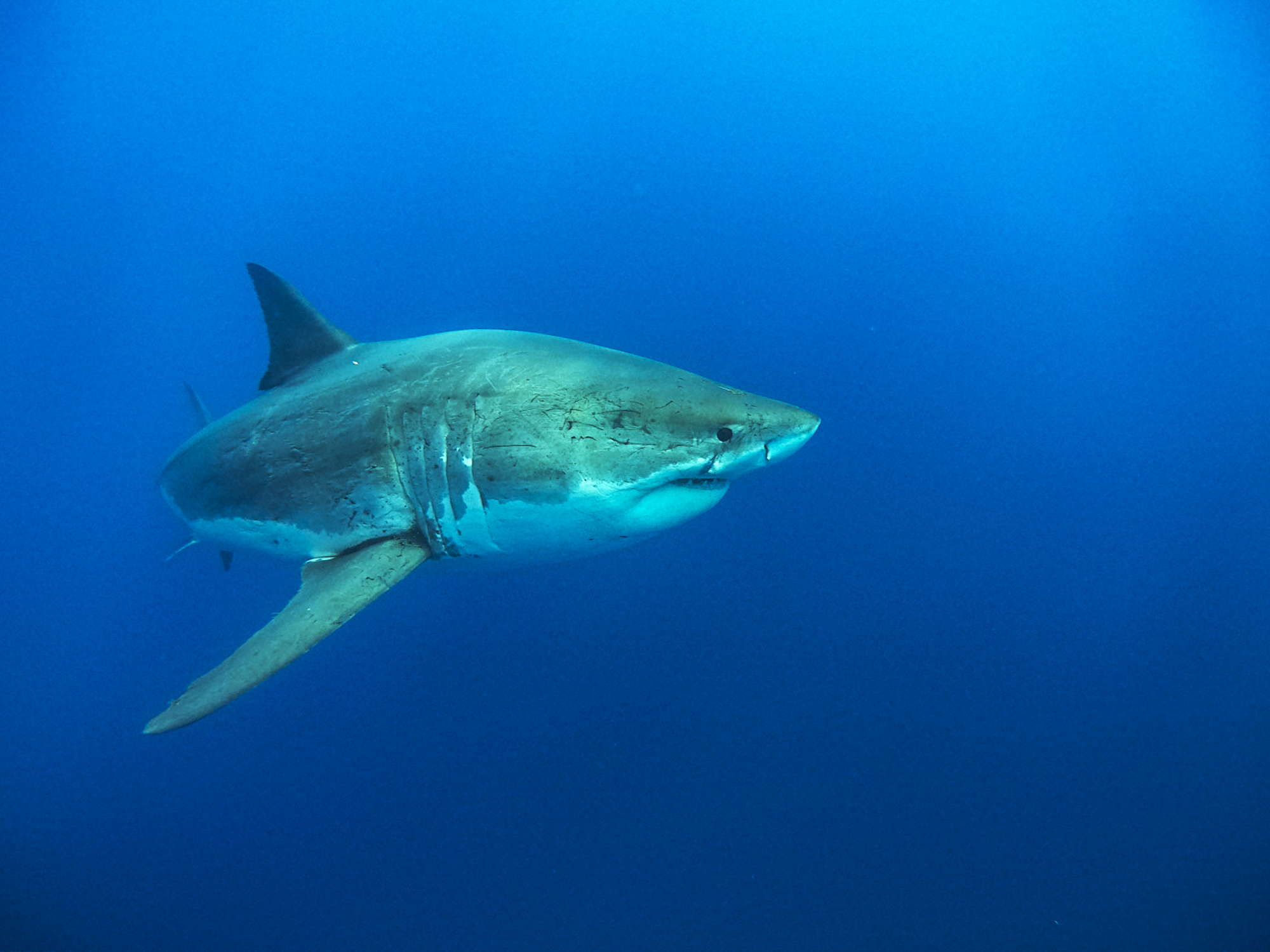