We were going to start our day with an 1on1 freediving/snorkelling practice when we received a radio call from our spotter plane, Nautilus Scout: a pod of 8 orcas, spotted northeast of La Reina, about 15 miles from our position. We boarded our fast speed inflatable (RHIB) to head over to that position, when the plane let us know that there were several pangas and local boats already heading to the orcas. Captain Gordon decided that we would avoid the traffic hour, to ensure a better interaction with the orcas and make sure the animals would not be stressed out by our presence. So we sent the Gallant Lady ahead, to monitor the orcas’ action from a distance, while we started scouting with the RHIB and the plane for other wildlife.

Very soon we encountered a massive Blue Whale! the biggest of all whales, this one approaching 20mts (60 feet) in length! We stopped the RHIB and waited a few minutes, then the blue whale popped up in close range, showing all the length of its endless body, and diving down next to us, displaying a massive tale as it glided in the water. Words cannot describe the beauty of that encounter.

After a few more encounters with whales and jumping mobula rays, the Gallant Lady gave us the news that most of the pangas had left the orcas, and that we could make our way to that area. As we got next to the Gallant Lady, we could see the pod of orcas, split in 3: on one side, swimming alone and displaying a big dorsal fin, was a male. Then a small group of 3 orcas swimming together, and a bit further a group of 4, including a baby orca!

The orcas were swimming pretty slow at the surface, diving down for short times, and following a straight route towards the island of Cerralvo. We decided to leave the group with the baby alone, as a wary mother tends to avoid close interactions with snorkelers, and made our way to the group of 3 orcas. We drove about 60 metres ahead of them, then stopped the engines, and waited floating at the surface. The orcas quickly appeared to come straight at the boat, so the snorkelers sled in to be gifted with a face to face encounter with the orcas!

An Orca Breaching Beside Our Guests

They swam right up at us, looking curiously at our human masked faces, then checked out the propellers and bottom of our RHIB and then continued on their route. No-one could believe what just happened! Then we heard the blow of other orcas close by, coming our way: the little family, with the baby, came swimming right by us, allowing us to see the mother and calf swimming alongside, the calf closely spooning under its mum while eyeing us. Unbelievable! This was one encounter that will never be forgotten.

We managed to get in the water 3 more times with that same pod, in really good conditions: water was 23C, visibility about 45feet and calm seas. After about 1 hour, the orcas started to spend more time underwater and changing course, so we understood they had enough of human watching, and we headed back to the Gallant Lady for a break, loading new batteries for the cameras and unloading all our happiness!

Then as it was only mid afternoon, we headed back on the RHIB, deciding to scout along the east coast of Cerralvo Island to spot more wildlife. The Gallant Lady would sail about 2nm out and the RHIB would go closer to the coast. After about 1 hour, we got a radio call from Armando, the mate at the wheel, who had 4 orcas swimming right alongside the Gallant Lady! We got to them, and enjoyed seeing them swimming along, but did not go into the water as they were swimming pretty fast.

Then the most unexpected thing happened: we stopped the RHIB so that everybody could jump in the water to cool down and have a pipi break. As the last snorkelers were climbing up the ladder back in the RHIB, I asked them to hurry: the rest of the orcas, including the baby, were heading towards us! So everybody put their fins and masks and got in the water for a last swim with that little friendly family. Then we could call it a day, full of emotions and with bright big smiles over everyone’s faces. And just after dinner, as the red full moon was rising above the hills of Baja California, a dark shade started covering it: it was a moon eclipse, a perfect ending to a very special day.

Experience This Unique Sea of Cortez Expedition Yourself

What We Know About Killer Whales’ Diet in the Sea of Cortez
They seemed curious about our boats, circling them closely. Our guests from the Gallant Lady had a b... 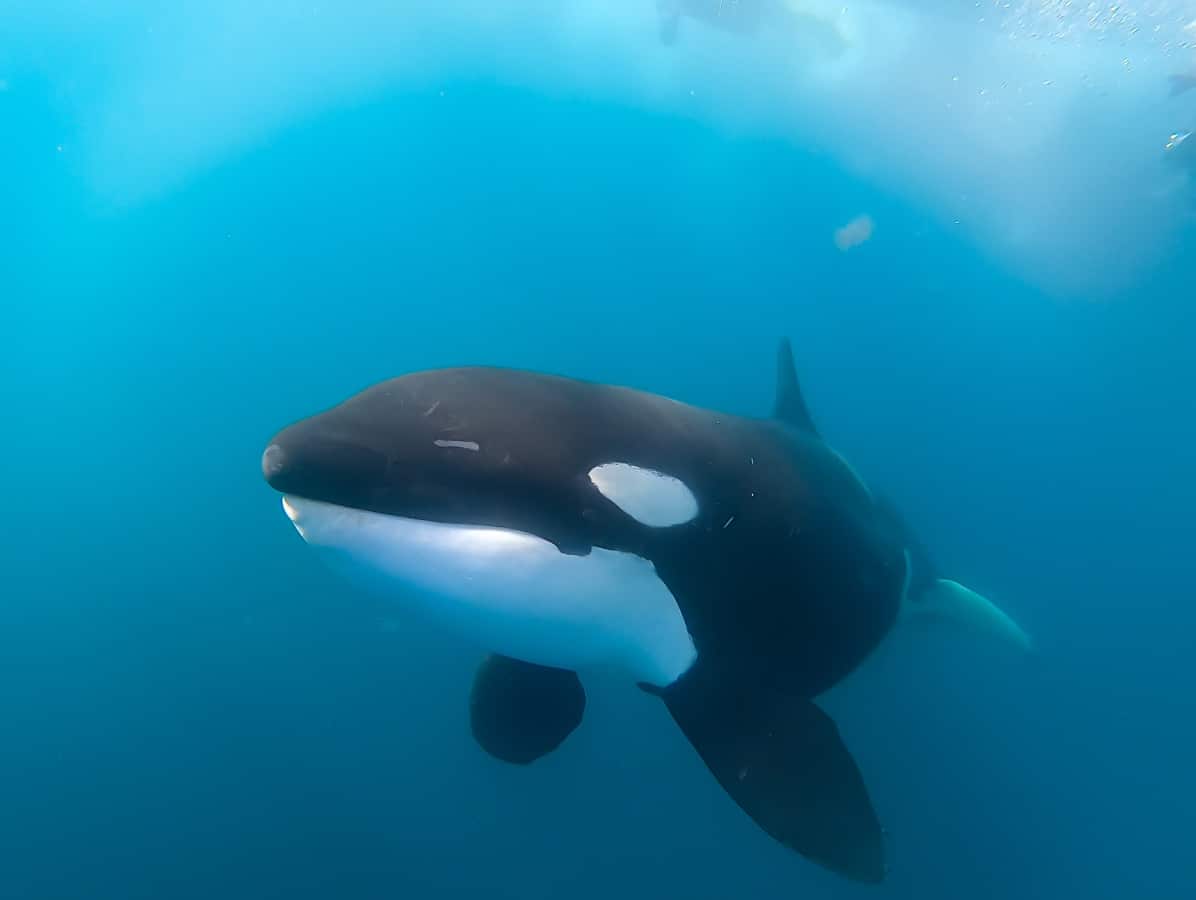