From earlier in the month:

We have been steaming from the flat Sea of Cortez into a choppier sea where it changes to the Pacific. Getting closer to San Benedicto we could see that it would be do-able to have at least one dive at the Boiler. The seas and the animal life made us do the whole day at the Boiler…

Visibility of an easy 100ft of blue water and a couple of dolphins were sitting vertical, getting cleaned by the Clarion Angelfish but they didn’t get too close to us this time, but the mantas did! We are still trying to ID them but I estimate we had around 10 different mantas around us throughout the day, staying with the divers through the whole 3 dives. We left them a couple of times to go deeper and check out the sharks and got to see a few big Galapagos sharks and juvenile, as well as half grown Silvertips. In between the dives there were mantas going around the Nautilus UnderSea and some of the real eager divers went snorkelling with them. From a manta dive perspective, it can’t get much better then what we had today. It was a good day today!

So back to the Rock… Roca Partida. We have our sister vessel here as the only company, the Nautilus Belle Amie. It was a beautiful meeting for me to see some dear friends that I have been diving with for more than 15 years. Lots of hugs and kisses were exchanged. I have met them many times on the Nautilus boats, as well as in Cocos, Malpelo, British Colombia, and in the Sea of Cortez. It was nice to meet again, but we don’t want to meet underwater, so we keep an hour away from each other on the Rock.

We went in the water first and on the current side, there were a lot of Galapagos sharks. It is quite typical when diving on this small rock that divers drop in the beginning and want to swim around and look for more around the next corner. As a guide I tag around behind my divers..;) In general, that is a bit of a waste of air and time. What my group noticed is that it is better to find a “hot spot” and let the life come to you, less motion in the water, slower breathing and placing yourself up current around where the creole fish are schooling will give a better result. We did this on the other 3 dives and are saw Galapagos, Silvertips & Duskys coming in. Lots of tunas were out today, from 15 pounders to some big monsters up to 400 pounds! All yellow fins!

Bonitos in the thousands are schooling and are slowly followed by silky sharks. On the rock we watched whitetip sharks trying to press themselves into to a crack where a bleeding creole fish is hiding. The white tips are actually biting on the rocks and two moray eels that are slender enough to get the creole fish are waiting there but don’t dare to get close enough. Normally whitetips don’t go for the moray eels, but you never know!

It has been a good day. We have decided to stay for one day more. We are carefully following the weather forecast. There are some waves and a bit of wind.

The moment after back rolling of the skiff into the water of Roca Partida there was what I first thought was a mobula because it was so small, maybe max 2 meters. When the water cleared up a bit more from our bubbles we could see it was a baby chevron manta! That is about the smallest I have seen here on the islands. The ocean floor around Roca Partida is around 3000-close 4000 meters deep, and there is a theory that the mantas give birth on deep water away from predators like sharks. For sure if it must have been born here, close to the island as it lives and is already 1.5 (almost 2) metres. It wouldn’t have taken long for the predators to come around if it was born elsewhere.

The water was a bit chilly on the rock, around 72˚F (about 22˚C). We had a lot of Galapagos and silvertips this time. The weather has started to calm down and it is really decent today. Yesterday in Socorro we had, for the first time of the year, an unusual big southern swell that messed up the visibility quiet a bit. We dove into the deeper water to get out of the “fog.”

Guest Zoe’s Adventure at The Boiler and More
The magnificent mantas graced us with their presence at the Boile... 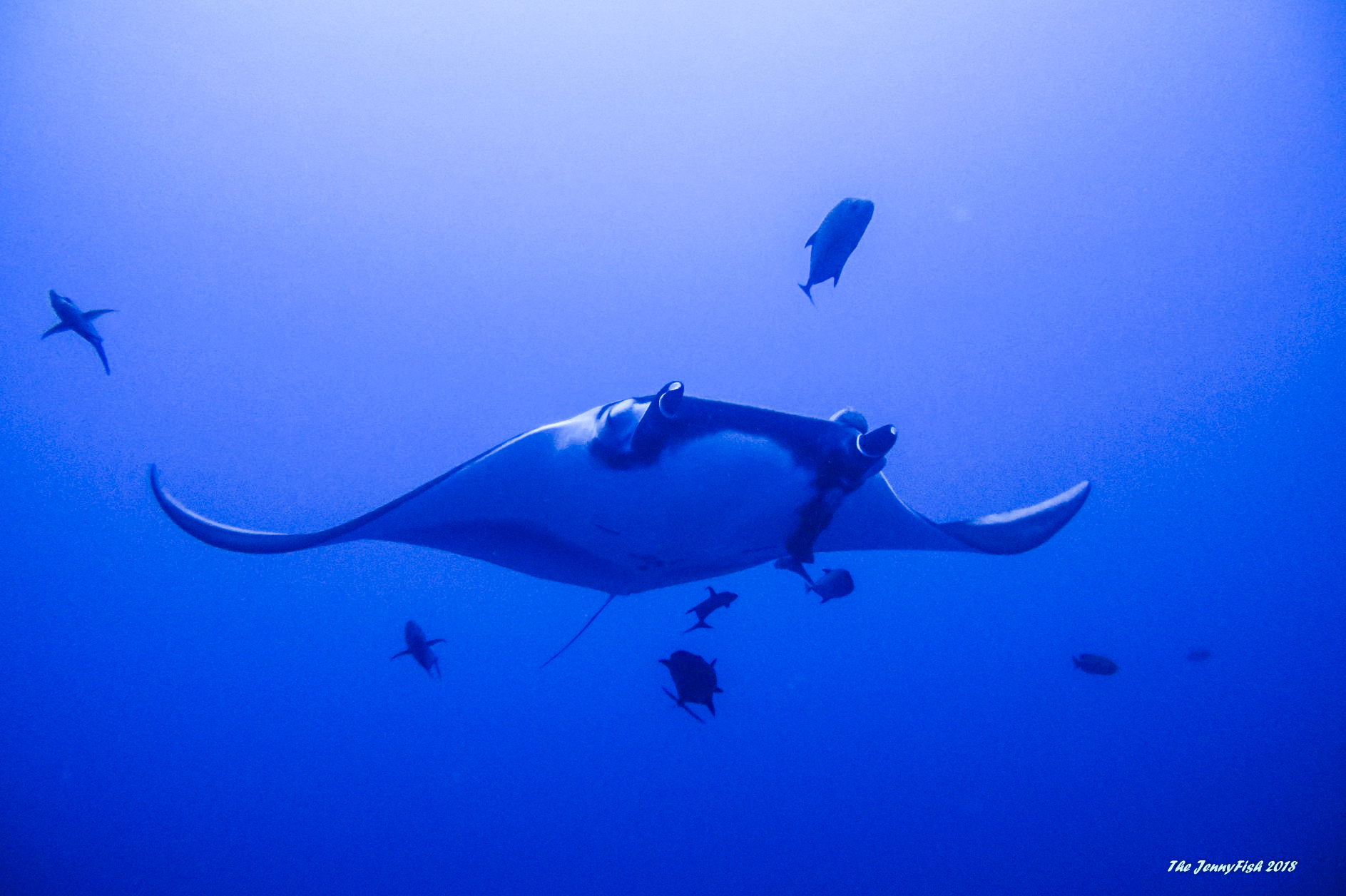 A Tiger Shark and more at The Canyon
We had a big tiger shark greet us as we were cruising along the lava flow, it was about 12-14ft long... 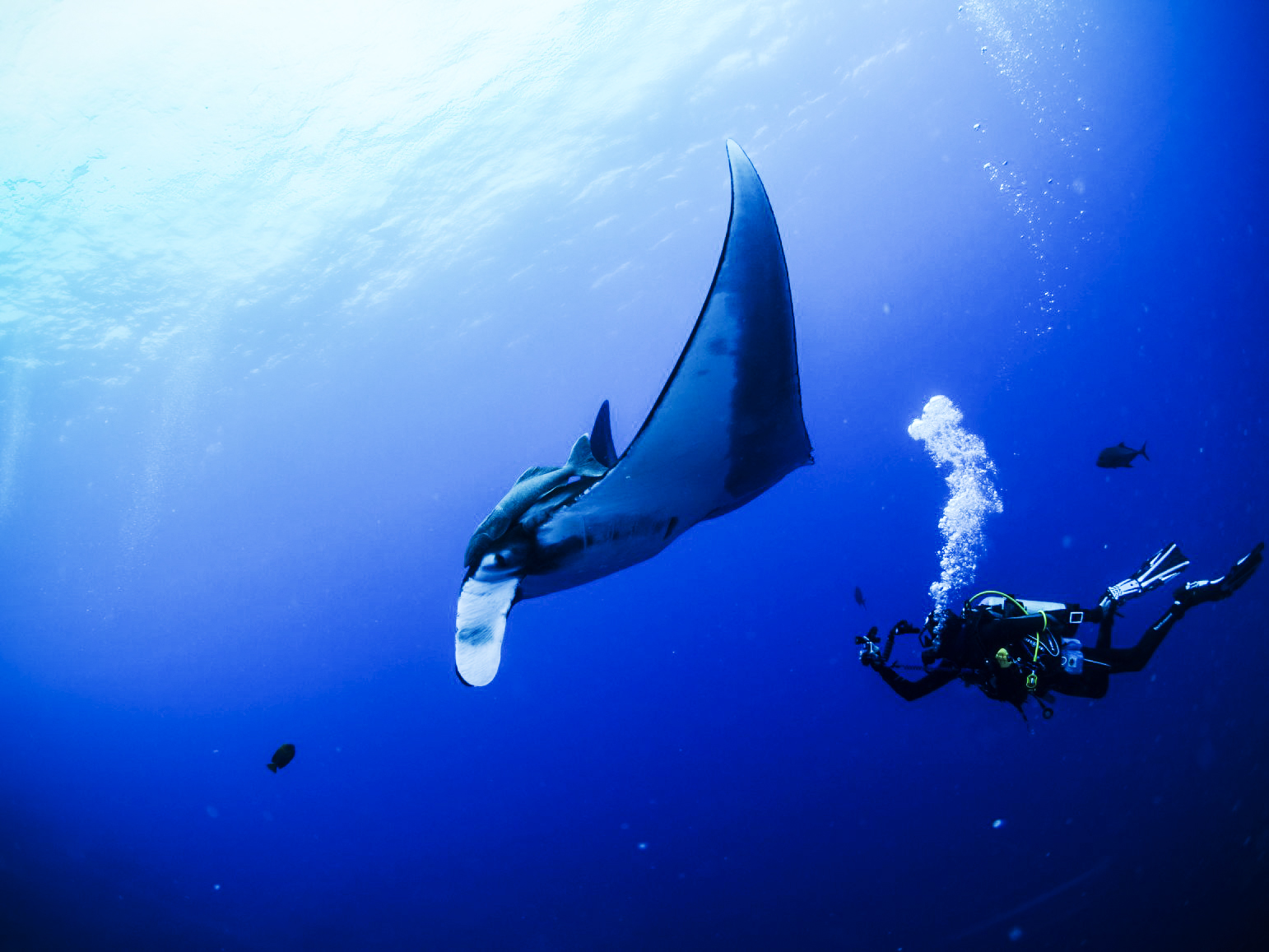